Merida from ‘Brave’ coming to Magic Kingdom – Plus other character changes

Starting mid-May, guests at the Magic Kingdom will have the opportunity to meet and greet, Merida, the heroine from the upcoming Disney-Pixar movie Brave, which hits theaters on June 22, 2012. Merida will appear in Fairytale Garden in Fantasyland which will be transformed into a setting inspired by her Scottish Highlands home.

Guests will be invited to engage in archery lessons and other activities until it’s their turn to meet her. Joining Merida will be the three bear cubs from the film, who will also interact with guests. 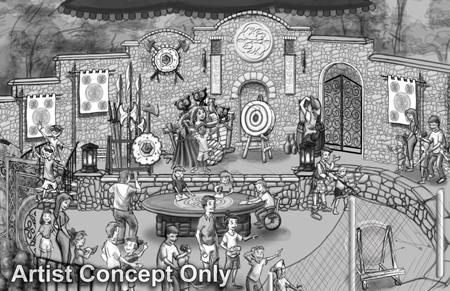 To the right is concept art shared by Disney Parks Blog of the area that will be soon transformed from a Tangled theme to a Brave inspired theme. Merida will also be meeting and greeting guests at Disneyland near “it’s a small world” in Fantasyland.

To prepare for Meridas arrival, Rapunzel will meet at the Advetureland Veranda starting April 15. Through the end of summer, Flynn Rider will return to meet guests alongside her. Rapunzel will also be joining the daily Celebrate a Dream Come True Parade.

Also on April 15, Ariel and Prince Eric will relocate to the glass gazebo, alongside the Adventureland Veranda near Swiss Family Treehouse.

UPDATE: April 5, 2012 – Disney has changed their plans. Ariel and Prince Eric will now be staying at the Advetureland Veranda and Rapunzel will meet at Town Square Courtyard. Flynn Rider will no longer meet guests, but he’ll be in the parade with Rapunzel.

Here’s a look at an archery scene from the upcoming movie:

Check out a video walk-through of the gallery for Brave at Disney’s Hollywood Studios:

Editorial: A bit of difficulty ‘being their...