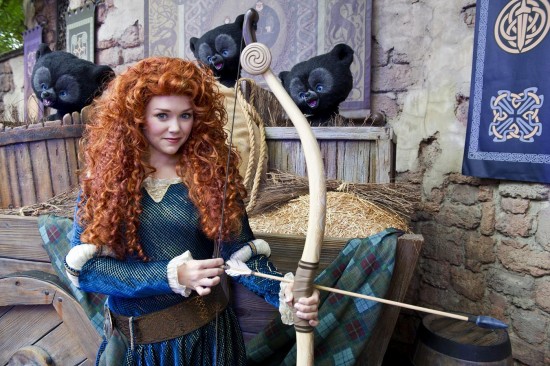 Merida, Disney/Pixar’s first princess from the film “Brave,” will be officially joining the Disney Princess family at a special ceremony taking place at the Magic Kingdom.

At 9:30 a.m. on Saturday, May 11, Merida will be joined by all 10 existing Disney Princesses – Snow White, Cinderella, Aurora, Ariel, Belle, Jasmine, Pocahontas, Mulan, Tiana and Rapunzel – in a regal celebration to welcome her as the 11th Disney Princess. And to commemorate the special occasion, you can purchase a limited edition Merida-inspired T-shirt, available in Youth and Toddler sizes while supplies last, and only at the Emporium inside Magic Kingdom park

Here’s a look at Rapunzel’s coronation ceremony that took place at Kensington Palace in London in 2011:

Where? At the Castle or in her character spot?