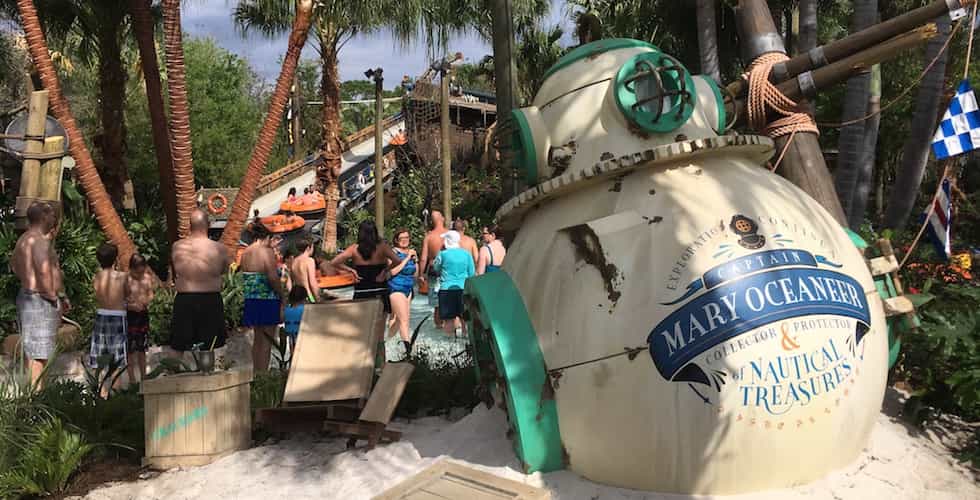 Ahead of the new Volcano Bay water park opening at Universal Orlando, Disney has opened a new water slide of their own at Typhoon Lagoon – Miss Adventure Falls.

Miss Adventure Falls is a new family-friendly water attraction which brings to life the story of Captain Mary Oceaneer, a treasure-hunting heroine who got stranded with her pet parrot at Typhoon Lagoon years ago by a rogue storm.

Up to four guests at a time are transported in their “treasure rafts” to the top of the slide, passing by Mary’s wrecked ship where her parrot is talking alongside their treasures. From there, this white-water adventure takes guests through twists, turns and dips where they will see deep-sea artifacts Captain Oceaneer collected on her many treasure hunts around the world.

With a ride time of two minutes, Miss Adventure Falls will be the longest attraction at Typhoon Lagoon. It’s also the first Disney water park attraction to feature an Audio-Animatronic.

The ride’s storyline is part of an ongoing S.E.A. (Society of Explorers and Adventurers) theme park storyline which is based on the former Adventurers Club at Downtown Disney, and originated at Tokyo DisneySea with the S.E.A. Fortress Exploration and the Tower of Terror. S.E.A. is also present in the Skipper Canteen and Big Thunder Mountain at Magic Kingdom, Mystic Manor ride at Hong Kong Disneyland, and the Oceaneer Labs on Disney Cruise Line.

Miss Adventure Falls can be found behind the pineapple fields of Crush ‘n’ Gusher. Although Shark Reef recently closed at the water park, the new ride is in a different part of the park and the reef wasn’t closed to make room for the new ride.

Here’s more about the ride and a full ride-through:

Aquazoid Amped will make a big splash at...