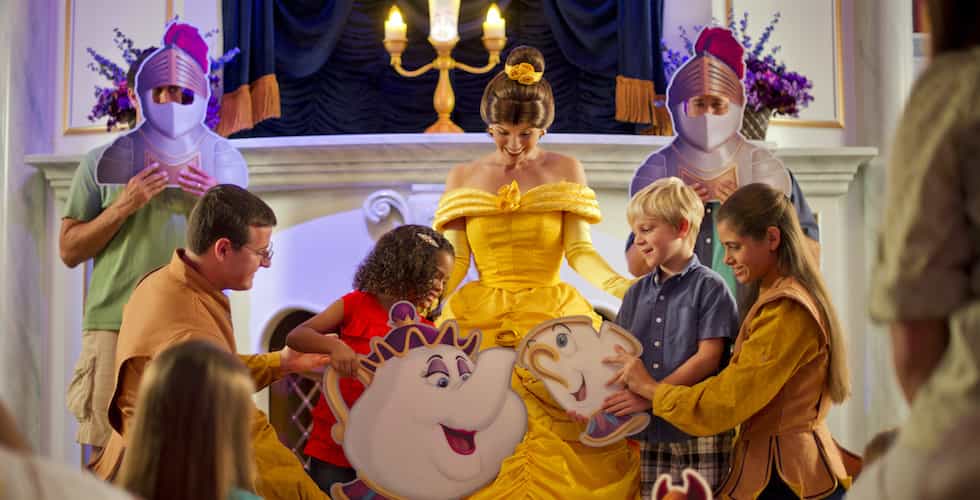 Immerse yourself in all things “Beauty and the Beast” before the new film arrives in theaters March 17.

On March 17, the long-awaited live action retelling of Disney’s animated classic, “Beauty and the Beast,” will enchant theaters nationwide. What better way to prepare for the exciting debut than with our top 10 enchanting “Beauty and the Beast”-themed experiences at Walt Disney World?

10. Visit Amorette’s Patisserie at Disney Springs to try the Enchanted Rose Cake, or take a trip to the Main Street Confectionary in Magic Kingdom to try their new Belle-inspired vanilla cupcake.

9. Step right into the story at Enchanted Tales with Belle in Fantasyland at Magic Kingdom, where guests venture through a magic mirror and help Belle tell the story of how she and the Beast first met.

8. Dine with royalty at Akershus Royal Banquet Hall, where all your favorite Disney Princesses, including Belle, join you in a royal feast – you can even take photos and get their autographs!

7. Visit One Man’s Dream at Disney’s Hollywood Studios to see Belle’s yellow dress and the enchanted rose from the new film, as well as catch a sneak peek of the first 15 minutes of the film!

6. Visit the France Pavilion in Epcot to visit Belle in her provincial village attire! It’s not every day you meet a Disney Princess wearing anything other than their royal ball gowns.

5. Let your heart soar with Belle and Beast during the Festival of Fantasy parade in Magic Kingdom every afternoon at 3 p.m. Here’s a viewing tip from us: watch the parade from its starting point in Frontierland to see the entire parade from start to finish without having to hunt for a place to stand or sit.

4. Experience a Broadway-style retelling of the tale as old as time with “Beauty and the Beast – Live on Stage!” at Disney’s Hollywood Studios. This 25-minute performance displays all the highlights and songs from the animated film that you know and love, with a sense of immersion that only the stage can provide.

3. Explore Belle’s provincial town in what one positively primeval guy would call “the best way” – by visiting Gaston’s Tavern in Fantasyland for a fresh LeFou’s Brew. You might even see the tavern’s owner parading around. Gaston loves to meet his adoring fans and patrons.

2. Be enchanted by the magic of “Beauty and the Beast” in a projection show of epic proportions with “Once Upon a Time,” the evening castle projection show at Magic Kingdom. Happening nightly before and after the “Wishes” Fireworks Spectacular, you can watch the castle be transformed as Mrs. Potts tells Chip bedtime stories of adventure and romance.

1. Be a guest of Belle and the Beast by dining in their castle at the Be Our Guest Restaurant. Enjoy breakfast, lunch or dinner at the restaurant in Magic Kingdom, and dine in the ballroom, Belle’s library, or even the forbidden West Wing. Don’t forget to try the grey stuff, it’s delicious!

While these are just a few examples, there are an endless amount of ways to be enchanted by “Beauty and the Beast” at the Walt Disney World Resort that are sure to get you in the mood for the new film. Disney’s live action retelling of “Beauty and the Beast” is in theaters March 17. Check out the final trailer for the film below:

Pirate and Princess Parties return to the...