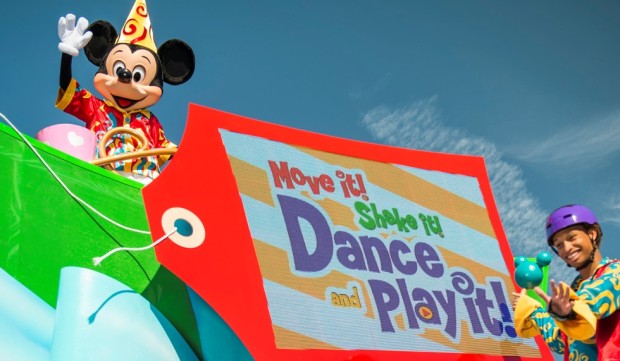 An updated version of “Move It! Shake It! Celebrate It!” has just hit the streets of the Magic Kingdom.

Featuring new music, characters and new ways for Walt Disney World guests to become part of the show, the “Move It! Shake It! Dance & Play It!” Street Party made its debut on Oct. 24 at the Magic Kingdom.

Following a parade down Main Street, U.S.A., guests are invited to join Mickey, Minnie, Donald, Goofy and their Disney pals for a dance party in front of Cinderella Castle.

Guests also can vote on the music playlist and share their photos with #MoveItShakeItPics for a special finale moment. The “Move It! Shake It! Dance & Play It!” Street Party will be presented several times daily at the theme park.

Get a look at some highlights, including the original song that opens the street party, below: