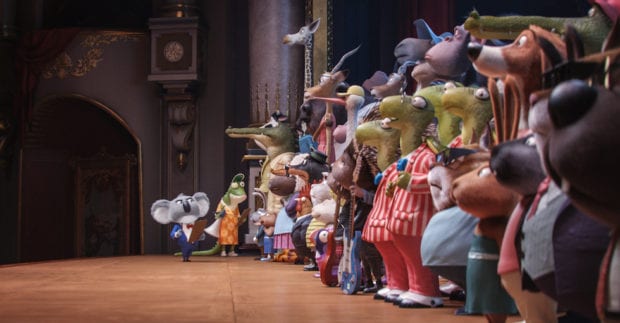 Illumination Entertainment, the team behind “Despicable Me” and “The Secret Life of Pets”, has a new movie called “Sing”. It’s an enjoyable family film, but it just doesn’t match up to the excitement, hilariousness and satisfaction of those previous movies.

“Sing” is set in a world with only animals, no humans. The start of the movie reminded me of Disney’s “Zootopia” (which certainly wasn’t the first to depict a society of evolved animals), but those comparisons quickly faded away. The story revolves around a koala named Buster (Matthew McConaughey), who owns a fledgling theater on the verge of closing down. So he comes up with the idea of holding a singing contest. But the $1,000 grand prize he’s prepared to give away mistakenly get highly increased thanks to his old iguana assistant Miss Crawly (Garth Jennings). We also see into the lives of the various singing finalist: a reluctant criminal gorilla (Taron Everton), a crooner mouse (Seth MacFarlane), a rocker teenage porcupine (Scarlett Johansson) and a mom pig (Reese Witherspoon). Who will win the competition and will the theater be saved?

The voice actors were great. I usually prefer when animated moviemakers use unknowns actors for their cast. I don’t want to keep picturing the actors as I’m hearing the voices. But for “Sing”, even though they used many famous actors for the voices, I barely recognized any of them. In fact, I didn’t even realize who was voicing who until the credits rolled. (Disney fun fact: Bill Farmer, the voice of Goofy, voices a reporter dachshund in “Sing”)

With a movie about a singing competition, you have to have a lot of music. I’m happy they went mostly with popular songs instead of all originals. I was grooving along with many of them. There are more than 65 popular songs in the movie, but most are cut off after just a few seconds. There are a couple of original songs, but they weren’t very catchy.

The graphics were great. The city and environments all looked very realistic. They even animated reflections in the picture frames and windows. I found myself marveling at the scenes multiple times.

Most of the characters were entertaining – especially Nana Noodleman (Jennifer Hudson and Jennifer Saunders) and the underused Asian red panda girl group (or were they pomeranians?). But overall, the story was lacking. It’s not going to be the next must-see movie, but it’s a fun family film all ages can enjoy.

“Sing” is rated PG and runs almost two hours long. It’s available in 3D and worth seeing that way. There are a few fun squid scenes as the credits begin but there are no mid- or end-credit scenes.

In The Parks
Illumination Entertainment is owned by Universal, so their parks are where you’ll find merchandise for the movie. There’s also a Sing photo booth near the Animal Actors stage at Universal Studios Florida.

Here’s the official trailer. Many of the funniest moments are in it.

‘The SpongeBob Movie: Sponge on the Run’...

Stars in the Parks: Dylan McDermott