“Avengers: Age of Ultron” has all of the same action and fun of the first Avengers movie. If you liked it (and who didn’t?), you’ll definitely want to see this one. 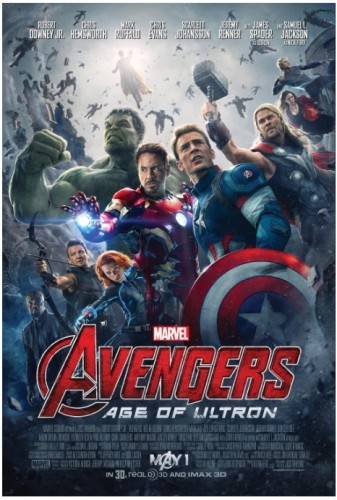 The movie wastes no time in getting you into the action. In fact, the very first scene is of the Avengers in mid-battle, fighting to get back the stolen alien technology from the first movie. It’s very abrupt. I would have preferred some build up. But that part is quickly over and the scenes start setting up the movie.

Two new “enhanced” characters are quickly introduced, and they’re working for Hydra. (The bad guys with the stolen technology.) These two young twins each have their own powers. The boy is super quick and the girl can play tricks with her enemy’s minds.

But Hydra isn’t all the Avengers have to worry about. In fact, it quickly becomes the least of their worries after Tony Stark, with the help of Bruce Banner, makes the mistake of using some of the alien technology to try to create Ultron, a thinking robot meant to protect the world. Unfortunately Ultron figures out the best way to make the world peaceful, is to rid it of humans.

All of the main actors return for this second installment, and all do a great job. There are even some surprise returning characters. (Of course, look for a cameo by Marvel legend Stan Lee.) The storyline can get a bit confusing at times, especially if you’re not up on your comic book characters. But everyone should be able to figure it out by the end.

There are a lot of references and nods to those who do know all the less-well-known Marvel characters. Since I know about a pending “Civil War” pitting the Avengers against each other (that already played out in the comics), I noticed lots of signs of that being set up for a future Marvel movie.

Although this movie loses a bit of the excitement of seeing all these characters fight together, that the first one had, you won’t want to miss this second installment. It shows no signs of slowing down.

The movie is rated PG-13 for lots of violence and an occasional curse word (which leads to some funny banter) It’s just over two and a half hours. (It didn’t seem too long.) I saw it in 3D, but I wouldn’t recommend it. It may have been the theater I saw it in, but it didn’t add anything to the movie and made it seem less sharp.

There’s no end credit scene, but there’s a quick omid-credits one that further sets up a future movie, which has already been set up in past credit scenes.

In the Parks
For the most immersive Marvel in Orlando theme parks, you’ll want to head to Super Hero Island in Universal’s Islands of Adventure. There you can meet Captain America and ride The Incredible Hulk roller coaster.

You’ll find lots of Marvel merchandise at Universal Orlando and Downtown Disney. In fact, a new Marvel Super Hero Headquarters store is now open in Downtown Disney West Side. Also be on the lookout for a Marvel: Age of Avengers wrapped bus traveling the Walt Disney World roads.

Here’s a look inside the new Super Hero Headquarters store:

I’m looking forward to a fresh take on the Avengers when the Russo brothers take on Infinity War.

Journey Into Imagination with Figment gets small...