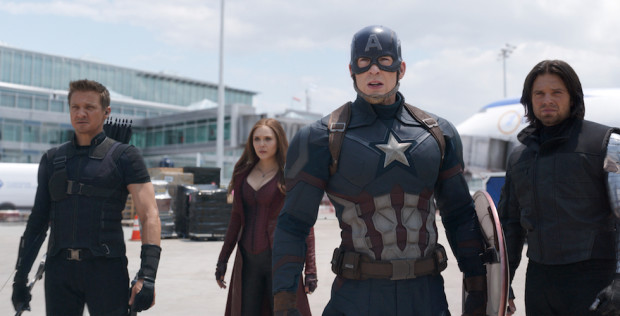 “Captain America: Civil War” is a must see if you’re a fan of superhero movies, great action and an interesting story. Even though his name is in the title, and Hulk and Thor aren’t in the movie, this is more of an Avengers movie than Captain America. But no worries if you’re a big Cap fan. He’s certainly featured throughout. 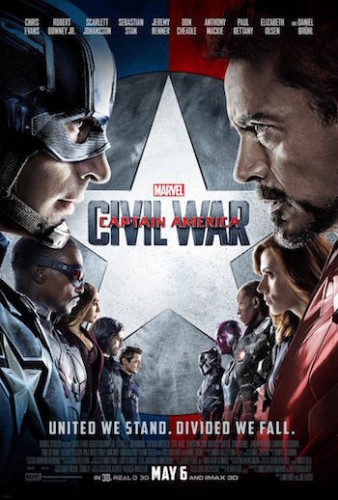 As before, the story starts with a battle. But it’s the aftermath of that battle and previous Avengers battles that set up the story. Should superheroes be held responsible for the collateral damage they create? Should they be allowed to try to protect us no matter the circumstances or location? Or should they be an extension of the law and be governed and given their assignments from the United Nations?

It’s not a new plot, we’ve recently seen this idea explored before, such as in in “Batman v Superman: Dawn of Justice” and before that, the X-Men movies. As in Batman v Superman, it’s not clear which side is correct. You’ll have to decide for yourself. You may chose based on which side your favorite characters are on, or you may be like me and switch back and forth as each side makes their points. But even though Civil War is rehashing a theme we’ve seen before, they’ve done it much better, plus added some twists and new characters that fit in well (Unlike Batman v Superman).

Half of the Avengers side with Tony Stark, AKA Iron Man, who agrees there needs to be a governing body to oversee and direct the team. The others side with Steve Rogers, AKA Captain America, who doesn’t trust a committee with unknown agendas directing them. But that’s just part of the argument. Steve’s long lost friend Bucky, AKA The Winter Soldier, has been seen committing a terrorist act and the Avengers new governing body has put out an order to shoot to kill if he’s found. But Steve still believes in his friend and fights to save him.

Each team brings in a new superhero to help them. They’re ones we’re familiar with, but unknown to most of the Avengers. The most anticipated is on Team Iron Man – Spider-Man. I won’t spoil anything, but if you’re a Spider-Man fan and are wondering what Marvel Studios will do with the character now that they are in charge of him, you won’t be disappointed. He’s given a good amount of screen time in Civil War and will be given his own movie next. I can’t wait.

Falcon on Team Captain America brings in Ant-Man to help their side, and his fans will also be happy with how he’s portrayed. The other new character is on his own side. I had heard of Black Panther, but I wasn’t very familiar with him. I really liked the character and am eager to see more of him in future movies. (Find out more about him here.)

“Captain America: Civil War” has the right mix of humor and action, but it’s not mindless action this time around. With the two teams each fighting for their point of view – with no one clearly right or wrong – this one will make you think.

The movie is rated PG-13, it runs about two and a half hours and is available in 3D. The 3D is very obvious in some places, almost too much. If you really like 3D, see it that way. Be sure to stay to the end of the credits. There’s a bonus scene in the middle of the credits and another at the very end. They’re worth staying for.

Here’s a look inside the new Super Hero Headquarters store:

A look at The Amazing Adventures of Spider-Man ride: