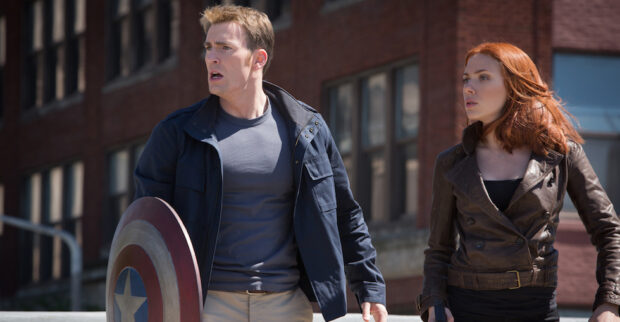 The first Captain America movie was an origin story and focused on him getting used to living in the future (our present). Then the Captain was featured in “The Avengers”. But now he’s back in the spotlight in “Captain America: The Winter Soldier”, with his past mostly behind him.

If you’re a fan of Disney’s Marvel movies, you won’t want to miss this one. It’s not only a great Captain America movie, but it also furthers the whole Marvel TV and movie franchise with major implications.

The movie starts with Steve Rogers AKA Captain America (Chris Evans) questioning his role in the modern world and as a part of the Shield organization. He doesn’t like the way Shield keeps secrets, not only from those outside of the organization, but also among other Shield members.

He is sent on a mission to save a hijacked ship along with other Shield team members, including Natasha Romanoff AKA Black Widow (Scarlett Johansson). The mission is a success, but not without a few complications, which the captain later finds out was because Black Widow had a separate assignment. This furthers his distrust of Shield and his boss, Shield Director Nick Fury (Sam Jackson).

It’s here things start to fall apart within Shield and the Captain is soon not only battling a mysterious super-powered stranger called The Winter Soldier (Sebastian Stan) but also running from Shield itself. Of course there’s a lot more to the story and some very surprising things happen but I like to keep my movie reviews very spoiler free – even more so than some of the things you may have seen in previews. This is one you’ll enjoy more if you try to avoid knowing any more than I’m telling you here. 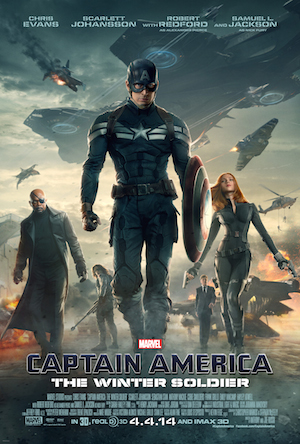 The Black Widow and Nick Fury play a big role in this movie. It’s almost as if they could have taken top billing alongside Captain America, especially Black Widow. Along with The Winter Soldier, there are some other super heroes introduced in the movie. Everyone has heard of Captain America, some have heard of Black Widow, but the characters starting to be introduced in the Marvel movies are more obscure. Many in the theater cheered when a couple were shown on-screen who are even too obscure for this super hero loving geek reviewer. But just because most may not have heard of them isn’t a bad thing. Just because they’re not as popular in the comics as The Avengers, doesn’t mean they aren’t interesting. Hard core Marvel comic readers will know them and be excited to see them on the screen, but those of us out of the loop will have the enjoyment and surprise of discovering them for the first time.

“Captain America: The Winter Soldier” is a great film with an interesting story, lots of action and some surprises. If you enjoyed the other Marvel movies, you’ll really enjoy this one, even if Captain America isn’t your favorite Marvel Super Hero.

The movie is rated PG-13, mostly for violence, and there is a lot of it. When you see a building being destroyed in “The Avengers”, you know there may be casualties but you don’t directly see them. The violence hits a bit harder in this new movie than in some of the other Marvel movies since a lot of it is one-on-one and against humans. It’s just a bit easier to see super heroes or aliens getting killed than to see regular soldiers or bad guys getting stabbed or shot. Keep this in mind before deciding to let young kids see it.

The movie is available in 2D and 3D. I screened it in 2D, so I can’t comment on how it looks in 3D, but in my opinion, 3D works best with animated films. As with most (all?) Disney Marvel movies, don’t leave when the credits start. There’s a scene half-way through the credits that most likely is setting up the next Avengers movie and one at the very end that could be setting up the next Captain America movie.

You’ll find Captain America in the theme parks but in very different places. Disney is selling a lot of Captain America merchandise at Walt Disney World, but because of Universal Orlando’s license with Marvel, you’ll have to head to Universal’s Islands of Adventure to meet him in person in Orlando. You can also meet Captain America on the Disney Magic cruise ship and at Disneyland in California.

Here’s a look at him and his super hero friends meeting guests in Marvel Super Hero Island at Universal Orlando:

He made his very first Disney appearance at last year’s D23 Expo:

Interviews from the world premier of “Captain America: The Winter Soldier” at El Capitan Theater in Hollywood, Calif.: (Spoiler alert, two of the new characters I purposely left out of the review are seen in this video.)