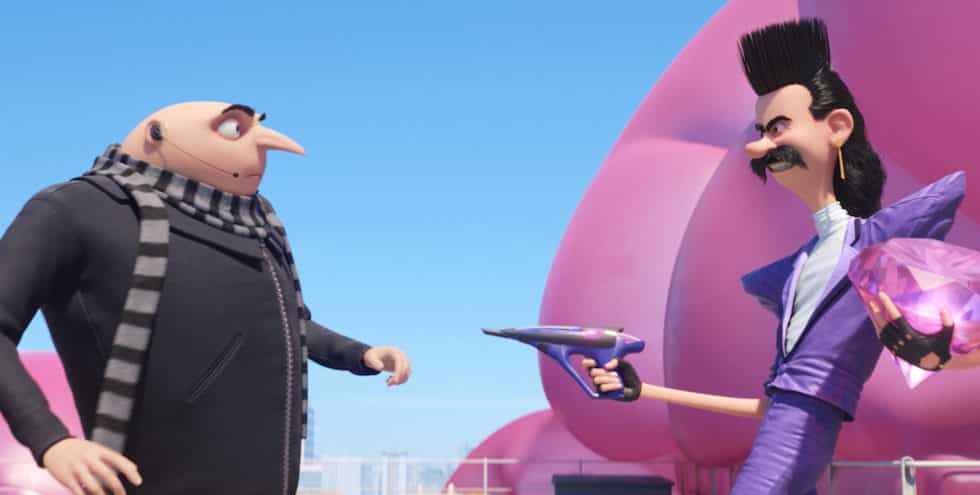 Gru and his Minions are back (well, most of his Minions – more on that later), and they’re joined Gru’s wife Lucy, their girls and a couple of new characters. If you enjoyed the first two movies, you’ll love “Despicable Me 3”. 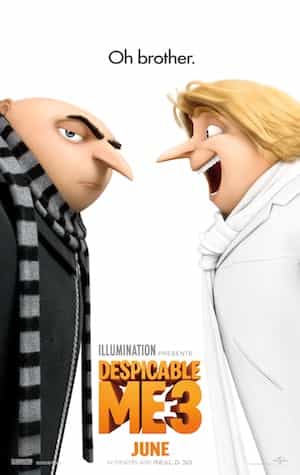 The story introduces a new bad guy, Balthazar Bratt (Trey Parker). He’s a former child actor who’s stuck in the ’80s. Gru (Steve Carell) and Lucy (Kristen Wiig) are hot on his trail as he steals the largest diamond in the world, but he’s one step ahead of them. This is bad news for the secret agent couple. But Gru gets some potentially good news – he has a twin brother he didn’t know about named Dru (Steve Carell).

Without spoiling too much, Gru and Dru team up to try to get the diamond back from Bratt. But where do the Minions fit in? Most of the Minions, led by one named Mel, want Gru to go back to being a bad guy. So they protest and set out on their own adventure in an amusing side story. You won’t see Minions Kevin, Stuart or Bob in “Despicable Me 3”. They’ll appear again in “Minions 2” in 2020.

Gru and Lucy’s daughters Margo (Miranda Cosgrove), Edith (Dana Gaier) and Agnes (Nev Scharrel) also play more of a side-story role, with Lucy being a new mom to them and Agnes’ quest to find a unicorn. I’m not sure how I feel about Dru. He has a major role in the movie but I don’t feel strongly about him one way or the other. I feel like he was just there to help the plot along.

Scenes with the new bad guy Bratt are some of my favorites. These scenes will appeal to parents like me who grew up in the ’80s. Bratt loves to dance and fight to ’80s songs. Some of them are only played for a few seconds but they’re recognizable and great. You’ll also have flashbacks to the ’80s seeing Bratt’s clothes, toys and weapons.

I definitely recommend the whole family goes to see the new Despicable Me. It’s a good story with lots of fun scenes and side stories. I was  laughing out loud more than a few times.

• “Despicable Me 3” is rated PG and runs an hour and a half long. It is also available in 3D. There are no end credit scenes, but there are some cartoons at the start of the credits.

Back to the Future Event at Celebration