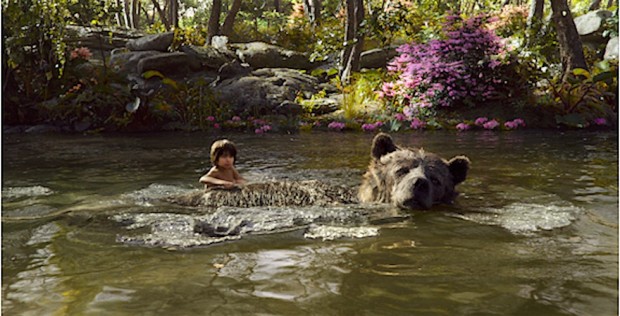 Mowgli takes a swim with Baloo in “Disney The Jungle Book”.

You’ll have a good time visiting the jungle with Mowgli and Baloo, whether it’s your first visit or you’re heading back into the forest. 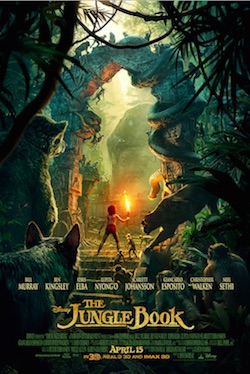 If you’re like me and you’ve heard of Disney’s animated version of “The Jungle Book” and have seen some clips, but don’t really know the story, no worries, you’ll still enjoy the new version. But since I haven’t fully seen the 1967 version, I couldn’t tell you if Disney has ruined anything for you, but I know there are some changes. (Don’t worry, the two songs we all know are in there.)

If you don’t know the premise, it’s about a boy being raised by animals in the jungle. Mowgli (Neel Sethi) isn’t really a normal boy though. Somehow he can speak to the animals and they speak back to him. The animals don’t really trust “man”, but they excuse Mowgli because he’s just a “man-cub”. But there’s a mean tiger named Shere Khan (voice of Idris Elba) that really hates man because he’s been burned by one – literally, and his hatred extends to Mowgli. The man-cub’s animal friends decide he’d be safer from Shere Khan in the man-village. Can they get him there before the tiger strikes?

The voice actors are well suited for their roles. You’ll probably recognize a few of them such as Bill Murray (Baloo), Scarlett Johansson (Kaa) and Christopher Walken (King Louie), and that may take you out of the story for a minute, but you’ll soon be sucked back in. Newcomer Neel Sethi was perfect as Mowgli. He not only looks the part, but his acting was spot-on.

The CGI is amazing. It’s obvious computers were used to make the animals talk, but it’s very hard to tell which animals were actually filmed and which are computer generated. Everything was very realistic. The behind the scenes features should be very interesting when the home version extras come out.

Although overall it’s a fun adventure with mostly friendly animals, there are some scary, very realistic-looking scenes. Small kids may not enjoy it. But everyone else, up to grandma and grandpa, will have a fun forest adventure with Mowgli and his animal pals.

“The Jungle Book” is rated PG, runs about an hour and 45 minutes and is available in 3D, which was very well done. I recommend you spend the extra bucks to see it in 3D. Although I saw it on a regular movie screen, I’d imagine the larger the screen, the better the 3D. It’s available in IMAX. There’s no need to stay through the credits. There are no extra scenes.

You can see The Jungle Book at Magic Kingdom, but I’m not talking about the movie. You can see an actual first edition of the original book on the shelf in the new Skipper Canteen restaurant. It’s actually sticking out to represent the book that triggers the hidden passageway through the bookshelf. Of course, your skipper on the Jungle Cruise ride will point out The Jungle Book sitting in the jungle along the ride path.

You can see a preview of the new Jungle Book movie with an introduction by Director Jon Favreau that pays homage to the original animated version in One Man’s Dream at Disney’s Hollywood Studios and Bug’s Life Theater in Disney California Adventure. Many Disney Parks merchandise locations are now selling some plush versions of the animals in the new Jungle Book movie and other merchandise.

You can regularly meet Baloo and King Louie at Disney’s Animal Kingdom and see King Louie in the Mickey and the Magical Map show at Disneyland Park and the Move It Shake It Celebrate it party at Magic Kingdom. In our video below, they are meeting with Mowgli at Animal Kingdom, but the man-cub is a very rare character. Don’t expect to see him.