Maui (Dwayne Johnson) may be a demigod — half god, half mortal — but he’s no match for Moana (Auli‘i Cravalho), who’s determined to sail out on a daring mission to save her people. Moana’s first challenge is convincing Maui to join her.

I’ve really been anticipating “Moana” ever since it was announced. I even had my picture taken in Moana’s Canoe at the D23 expo last year. After seeing the movie, I can definitely say I wasn’t let down. 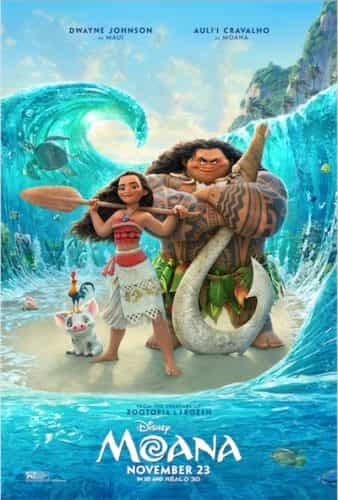 Set somewhere in the vicinity of 3,000 years ago in a village on a Pacific island, Moana (Alui’i Cravalho) and the other children of the village are being told the story of the demigod Maui (Dwayne Johnson), who stole a jewel called “the Heart of Te Fiti”. It’s an ancient artifact responsible for creating new islands and bringing life to them. When he stole the jewel, all land was set on a course to deteriorate over time and lose all life. The only way to return things to the way they should be, is to return the Heart to Te Fiti itself. Only the one who is chosen by the ocean can retrieve Maui from his isolation and restore natural order. Moana, as the chosen one, has to go on a crazy adventure across the ocean, with the company of Hei-Hei the chicken (Alan Tudyk) and Maui, encountering villains like Tamatoa, (Jemaine Clement), a giant crab who loves shiny things, and The Kakamora, little warriors that use coconuts as their armor.

The amazing musical score was written by three different artists, Opetaia Foa’i, Mark Mancina, and Lin-Manuel Miranda. The tunes and lyrics are sure to get stuck in your head, and will definitely fit in with other iconic Disney songs. My personal favorite was “How far I’ll go”, which I hope ends up getting as big as “Let it go”.

Moana has no love interest. In fact, romance isn’t even touched upon in the movie, which is a refreshing change in the pattern of Disney princess movies. Albeit Moana isn’t a “Princess” per-se since she’s just the daughter of her village’s chief.

The entire theater was laughing throughout the whole movie, especially at almost anything Hei-Hei did. There were even some hilarious moments when it seemed Disney was making fun of themselves, with pokes at, and Easter eggs from other movies like “The Little Mermaid”, “Frozen”, and the Disney Princess brand in general.

Before the movie, you’ll see a new animated short called “Inner Workings”. It follows a regular guy on his journey to work in the morning, and the fight between his personified brain and heart (Sort of like “Inside Out” but with bodily systems instead of emotions). It was a cute and funny short, but not my favorite.

“Moana” is rated PG and runs about two hours long. It starts playing in theaters everywhere on Wednesday, Nov. 23, 2016. I recommend everyone see it (and I mean everyone), especially lovers of musicals, because I think this movie’s music might even be – GASP! – better than Frozen’s. There were a couple moments when I noticed the 3D improved the experience, but not enough to make it worth the extra cash. Be sure to stay after the credits for one last Easter egg reference to another Disney movie.

In The Parks:
Moana has begun meeting guests at the Aulani resort in Hawaii and is coming soon to Walt Disney World and Disneyland. At Disney’s Polynesian Village Resort at Walt Disney World, guests can shop at a store called “Moana Marketplace”.

Here’s The Rock introducing a song from “Moana” at the D23 Expo: