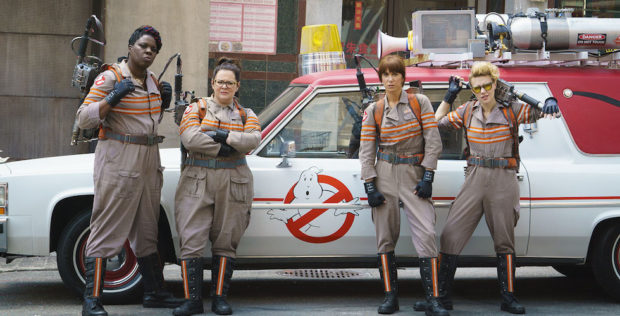 We were invited by the Spooky Empire horror convention in Orlando to a screening of “Ghostbusters”, and I liked the re-boot better than the original movies. I know my opinion is going to be the unpopular choice by far, but keep in mind I’m 17, and this movie was definitely created to introduce the franchise to the new generations. 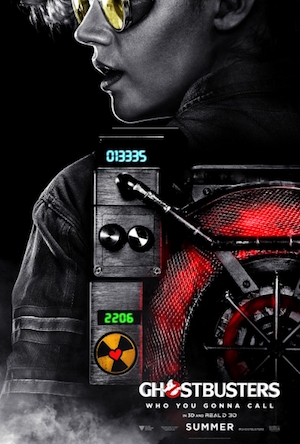 Since this Ghostbusters is a re-boot, most people probably assume it follows the same storyline but with female ghostbusters instead of male. This isn’t the case at all. The new movie has a completely new storyline, and is much more of a comedy than the original. There are only a few similarities: the Ghostbusters name, logo and the fact that New York City is going through a supernatural crisis.

The story starts out when physicist Erin Gilbert (Kristen Wiig) finds out her old colleague and friend Abby (Melissa McCarthy) is still selling a paranormal book the pair had written together years before (without her permission). When Erin goes to confront Abby about the book, she gets caught up in Abby and her assistant Jillian’s (Kate McKinnon) research of the paranormal when they encounter a ghost. Meanwhile, someone is building devices to enhance paranormal activity, which New York City Subway worker Patty (Leslie Jones) witnesses, and goes to see the trio for help. The four team up and have to solve the mystery of who is causing so much paranormal activity around the city, and try to prevent the oncoming apocalypse.

The movie was full of references to the original movie and even included cameos from the original movie’s cast. Even someone who swears up and down they won’t enjoy the new movie because “the originals will always be better”, will absolutely love the cameos. Don’t worry, the Stay Puft marshmallow man and Slimer are both featured, even the ghostbuster’s logo now has its own character.

“Ghostbusters: Answer The Call” is rated PG-13 and runs about two hours. It’s available in IMAX and 3D, but I didn’t see it in either. I did hear from someone who had seen it in 3D that it was worth it. There are scenes throughout the length of the credits and a scene after, so definitely stay the whole time.

What a strange review because you never answer the question in title or give an opinion about the movie, and that is the point of a review. I would understand if you’d prefer this version, the same as kids loved Episode I-III from Star Wars better then the original although they where a piece of crap. There was even love for Jar Jar!
Saying the new version is more of a comedy is plain wrong. The original had better humor, less loud, less ‘look at me how funny this line is’, but it was hilarious.
I hope the movie will become a success because the ip is a lot of fun but I don’t care for more ghostbusters in my life. If I want to see a fun movie I just start up the original.

He says in the first sentence that he thinks the reboot is better than the original.

Video of the new Tronorail at Walt...