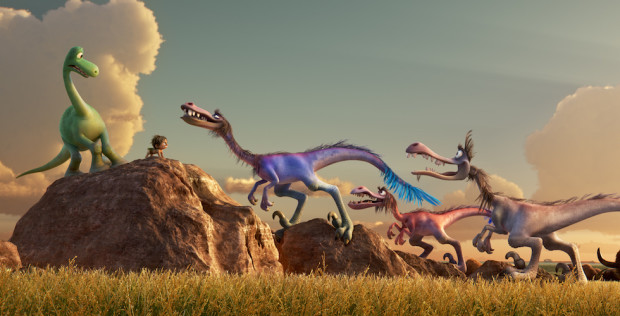 Pixar films are legendary for their extraordinary character development, non-verbal storytelling, fantastic musical scores and ability to create tear-inducing, visually unforgettable scenes. “The Good Dinosaur” incorporates these hallmarks and certainly entertains the whole family. Overall, the film lacks the seamless composition associated with other Pixar productions, but will still make for an enjoyable experience during the holidays. 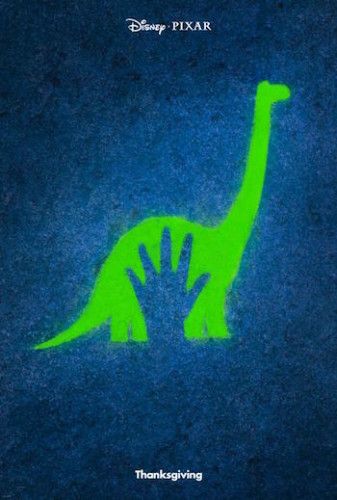 The film opens with an asteroid heading for Earth, then missing it all together. With their extra time on the planet, dinosaurs develop basic farming techniques as feral yet opportunistic humans feast on the harvest.

Young Arlo (voiced by Raymond Ochoa) enters the world an undersized and timid apatosaurus. He struggles to achieve success on the family farm and is swept into the prehistoric wilderness after an encounter with a young human (voiced by Jack Bright). The story takes on an odyssey format with the duo struggling to return home as they encounter vicious pterodactyls, T-Rex ranchers, and challenges posed by mother nature. A great deal of comedy comes from Arlo’s ‘boy and his dog’ relationship with the human, who is given the name ‘Spot’.

Arlo will no doubt make a cute plush toy, but the film’s visual style seems to have an internal conflict. (Perhaps a reflection of the film’s production team changes and postponed release date.) The photo-realistic landscapes and water features are visually stunning, especially in 3D. But the protagonist and his family are round and gummy in a world where every other character seems to have sharp teeth, claws, scales, or mangy hair. The cartoonish apatosaurus styling feels very out of balance and disconnected. Also, green dinosaurs against a green landscape made for a difficult focus in several scenes.

Overall “The Good Dinosaur” is a fun, family-friendly film that alternates between themes of inner courage and finding one’s place within a family.

The run time is comfortable at an hour and 41 minutes, though some elements of the storyline felt long and meant for the cutting floor or bonus features. There are some scenes with frightening imagery and characters (think fearful forrest in Snow White), so be prepared to help little ones understand what’s happening. Not to mention a scene involving fermenting fruit and a hangover. There’s no extra scenes during or after the credits.

Sanjay’s Superteam
Before the feature, this short semi-biographical film centers on a Hindu boy who is more interested in cartoon superheroes than morning prayers. The piece incorporates mythology and a graphic novel style. The beginning is comedic and the ending endearing.

In The Parks
Besides merchandise, which you’ll find in all the theme parks, Disney Springs and Downtown Disney right now, there aren’t any attractions or characters to meet from “The Good Dinosaur”. There is a preview of the film playing in One Man’s Dream at Disney’s Hollywood Studios, but that ends Dec. 4, 2015.

Here’s a look at a Disney Parks Blog Meet-Up for the movie, including a preview of the film (and a roar by our Attractions Show Co-Host Elisa).

Thank you so much for your review, but i really have’n see this movie: ‘The Good Dinosaur’ . And then i will go to see it! BTW, Pixar films are legendary and awsome!

Why isn’t there a theme park talent...