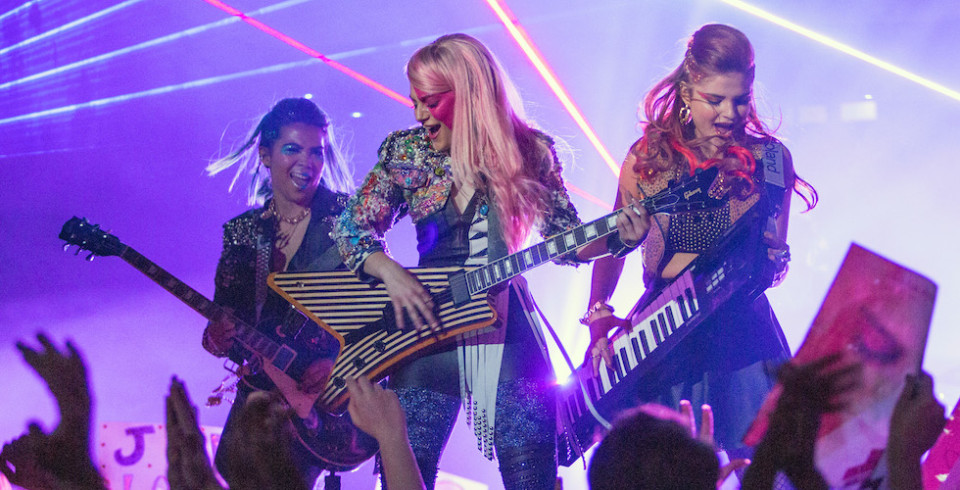 Trailers for the live-action “Jem and the Holograms” hinted that the ’80s cartoon series would be getting a major makeover, and left many fans – even William Shatner – wondering how Jem would be reimagined for the millennial era. Director Jon M. Chu’s film champions a theme of self-empowerment within this glitter encrusted coming-of-age origin story. 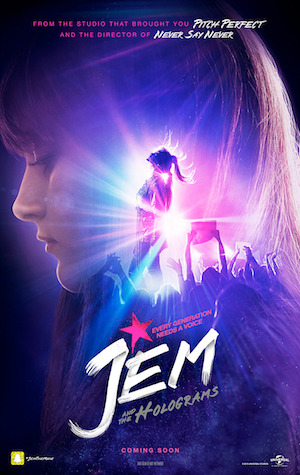 The movie opens as a video confessional. Through a series of found-footage segments we meet Jerrica Benton (Aubrey Peeples), a talented but reclusive teenager. She finds the confidence to record an acoustic performance while wearing intense makeup and a pink wig, identifying herself only as “Jem”. Jerrica becomes a mysterious Internet sensation after the video goes viral, thanks to her sister Kimber (Stefanie Scott). The public’s reaction catches the attention of Starlight Music exec Eric Raymond (Juliette Lewis). Raymond anxiously signs Jerrica, who travels to Los Angeles on the condition Kimber and her foster sisters (Aurora Perrineau and Hayley Kiyoko) are also included as band members.

The girls are given outrageous fashion makeovers, rehearse new material, and begin searching for clues to unlock “Synergy”, a defunct piece of technology left to Jerrica by her father.

These ventures from the source material may leave some long-time fans of the series disappointed. Jerrica isn’t a savvy business woman or philanthropist. However her struggle for identity – how the persona of Jem and her life as Jerrica can balance -is familiar. The band isn’t performing with hologram technology. Synergy has an updated look and adorable personality, but I really wanted some holograms during the concert sequences, or a little projection mapping. That said, the band’s performances throughout the film feature fantastic musical energy and beautiful visuals.

This movie aims for a tween audience, with enough laughs and nods to the series for older fans. The new-era approach is emphasized with online activity driving the film’s transitions and interactions. Google Earth sequences are utilized for location introductions, with many YouTube-style videos and social media references throughout. Lewis’ character adds a great deal of comedy and tension to the film. Keep your eye out for celebrity cameos and stay during the credits for a bonus scene. It hints at the kind of storyline I’d love to see in a sequel. That, and holograms. I just want performance holograms.

“Jem and the Holograms” runs just under two hours and is rated PG for thematic material including reckless behavior, brief suggestive content and some language. Visit the official website at JemTheMovie.com.

In The Parks
Jem and the Holograms doesn’t really have a presence in theme parks, but a limited edition cosmetic line includes lipstick, eyeshadow, and additional accessories. The line is currently available at Sephora locations nationwide, including Anaheim’s Downtown Disney District.

Does the nemesis of Jem have a roll…. was it the misfits…. whoever the evil girl bad was?

Many of the storylines from the original series focused on complicated situations created by rival bands, including The Misfits. Pizzazz was the group’s leader.

This article containers spoilers, so those who would appreciate a surprise in the theater should wait until after seeing the film: https://www.ew.com/article/2015/10/23/jem-holograms-kesha-pizazz-misfits