Movie Review: ‘Minions’ is a cute origin story for ‘Despicable Me’ 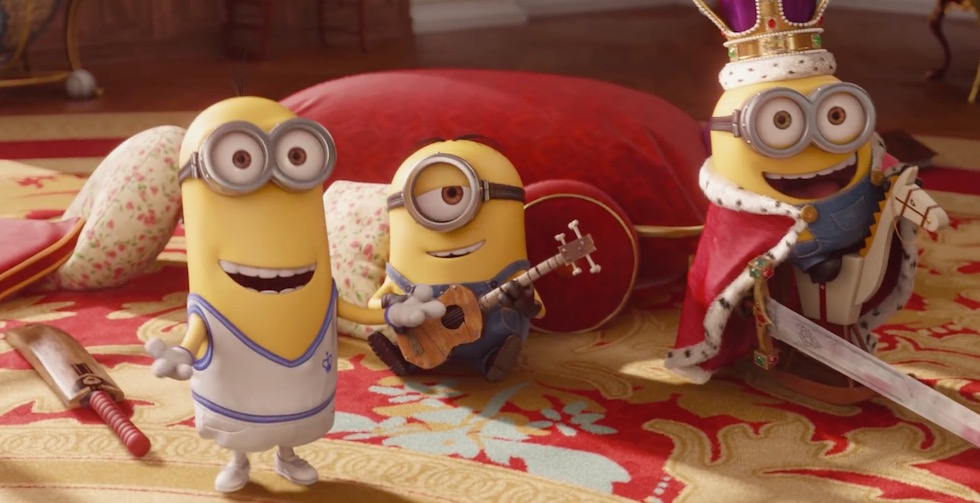 The new “Minions” movie takes you back in time to show you how the little yellow guys we love and adore got their start. 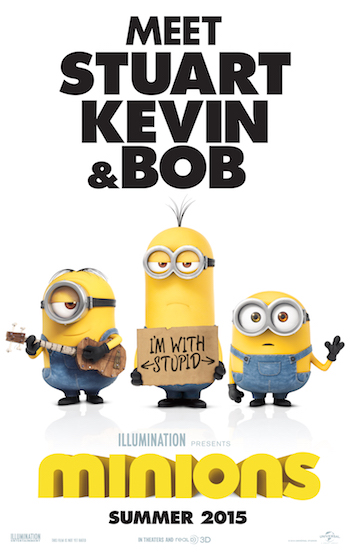 The Minion origin story starts further back than you might think. The movie starts by showing us the Minion cells, floating around, looking for some lager cells to follow around, then it heads to the age of the dinosaurs. You get a glimpse of many of history’s most memorable villains and the Minions’ role with them. These are the Minions’ masters before Gru, whom you know from the Despicable Me movies. Because the Minons’ help isn’t always helpful, and sometime harmful, the Minions try living on their own. But Minions just aren’t happy without a villainous master to serve. So they send three Minions you may have heard of, Kevin, Bob and Stuart, out to find the group a new master. This is where Scarlett Overkill (Sandra Bullock) comes in.

Scarlett is truly a character you’ll love to hate. Her crazy, ruthless antics are the envy of all the villains of her day. (The main plot of the movie takes place in 1968, and the soundtrack is from that era.) The Minions take on their new master’s mission in England, which is truly a royal plot. You may be dazzled by Scarlett’s gadgets and weapons, although, I think you’ll agree that dumb luck might really be the hero when it comes to the Minions.

The movie is full of laughs and has some exciting scenes, but since the Minions mostly speak gibberish, there’s little dialog throughout the movie. You’ll hear from a narrator, Scarlett and a few others, but it’s a Minions movie and the longer non-dialog scenes may make some lose interest. But this is definitely a movie the whole family can enjoy with many laugh out loud moments. Even if you haven’t seen any of the Despicable Me movies, you can enjoy Minions. “Minions” will be a great fit for the home market and will become a nice addition to a Despicable Me movie collection.

The movie is rated PG, is an hour and a half long and is available in 3D. We recommend skipping the 3D as it didn’t add much to it. Stay during the credits for some fun scenes and wait until they’re over for a pretty lengthy extra dance sequence at the end.

For all things Minions, you’ll want to head to Universal Studios Florida. Here you’ll see the Minions, Gru and the girls in the Superstar Parade each day. Look for the parade float and all the characters to come out to meet park guests earlier in the day too, before the parade. You can even be turned into a Minion yourself in the Despicable Me: Minion Mayhem ride. And for a limited time, you can play a Minion scavenger hunt at the park. You can also ride the attraction and meet some Minions at Universal Studios Hollywood.

Here’s a look at the ride’s themed queue and the fun gift shop at Universal Orlando:

Here’s a preview of what you’ll see on the ride itself:

Here’s the Universal Superstar Parade featuring Minions and Despicable Me:

I don’t know whether it’s because I’m a ‘Kevin’, but the movie just didn’t quite tick the yellow boxes for me.
I am a BIG Minions fan. I truly love the whole Despicable Me and mischievous Minions but with so much opportunity, the movie just seemed to lack in so many ways.
The opening scenes were tremendous, but beyond that, it’s hard to recall any particular moments that lit the family up.
Surely that’s not right for such a playful set of characters as the Minions?