Movie Review: ‘Monsters University’ doesn’t live up to the original, but still a must see for fans 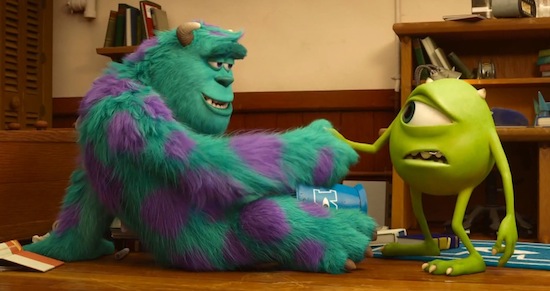 You favorite blue and green monsters are back, well, sort of back in time. Monsters University follows Mike Wazowski and James P. Sullivan (AKA Sully) in their college years. Fans of Monsters Inc. will enjoy Monsters University, even though it doesn’t quite match up to the original.

The story starts with a very young and very cute Mike in elementary school. You can see he doesn’t have a lot of friends but it’s clear his goal in life is to be a scarer for Monsters Inc. We don’t meet Sully until his college years. He doesn’t so much want to be a scarer as he has always just figured he’d be one with no problem, as his dad was one of the top scarers of his time. Yes, since we’re going back in the timeline from the Monsters Inc. movie, scaring kids is still the goal, not making them laugh. 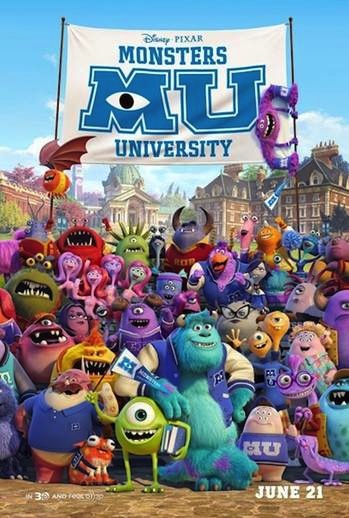 While Sully finally realizes there’s more to a proper scare then just having a loud roar, Mike fights to be accepted as a potential scarer by studying all the techniques of a great scare. Their butting heads causes them to both get kicked out of scaring school at the college. But they have a chance to redeem themselves if they can team up with each other and some other misfits from the Oozma Kappa sorority. As their name implies, Oozma Kappa is just OK.

Maybe I should have used the word nerds instead of misfits, because this is the monster version of a movie most parents will remember, “Revenge of the Nerds”. Both movies have you rooting for the underdog as they fight to be accepted in college and one-up the popular sororities. This isn’t a bad or uninteresting storyline to follow, but it just didn’t hold my interest like the original Monsters movie did.

There are some characters who are not so nice, but no real villain. There are some cute characters, but none as fun as Boo. There’s a goal in the movie, but it just didn’t have the same payoff as the first movie even though there are some surprises mixed in. That said, it’s still an enjoyable movie which Disney, Pixar and Monsters fans will enjoy.

As much as I enjoy John Goodman and Billy Crystal’s performances as Sully and Mike, if another Monsters movie is made, I’d love to see even further back in the timeline. After all there’s a line in Monsters Inc. where Mike tells Sully he’s been jealous of his good looks since the fourth grade. Watching young Mike was the most interesting and fun part of the movie.

Before the movie begins, moviegoers will see Pixar’s latest short, Blue Umbrella. It’s enjoyable but nothing to get upset about if you’re late and miss it. But stay past the credits of Monsters University for one last good gag.

Disney•Pixar Monsters University is rated G and is available in 3D. Although the 3D adds to the beautifully rendered monster world, I’m not sure it’s worth the extra bucks.

Here is a look at the Monsters University happenings in the theme parks:

Here’s Sully (voiced by John Goodman) singing Scream, sung to the tune of Shout during the Homecoming. This song was recorded just for the celebration:

Also at Hollywood Studios is a production gallery from the making of the film:

If you’re headed to the Magic Kingdom area, be on the lookout for the Monsterail:

Disney’s Monstrous Summer event was kicked off at Epcot with Mike taking over Spaceship Earth:

Over at Disneyland, Mike and Sully took over the castle lighting show during Disney’s All-Nighter:

A look at runDisney’s Wine and Dine...