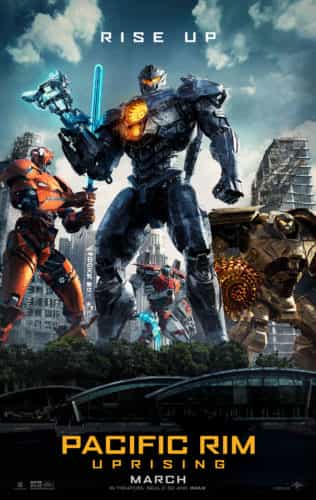 John Boyega takes the reigns as Jake Pentecost in the second installment of the Pacific Rim series. This spoiler-free review will touch on the overall feel of the film and characters, while also steering clear of anything you wouldn’t know from the trailers.

First off, “Pacific Rim: Uprising” is a non-stop action flick. Scene after scene is full of fighting, with Jaeger versus Kaiju, Jaeger versus Jaeger and human versus human. This makes the nearly two hour film fly-by as sequence after sequence pulls you farther into the action.

John Boyega is well known as the Stormtrooper-turned-rebel, Finn, from “Star Wars: The Force Awakens“. This was one of my biggest fears going into the film. Many actors get stuck only being seen as the one person they most famously portray. With the film being about someone who wouldn’t commit to their duty, but is forced into the action, I was afraid Boyega was getting typecast. I can happily say he has proven he’s more than just a rebellious Stormtrooper. His acting, alongside Amara Namani (Cailee Spaeny), carried the film to its climatic ending.

Overall, many of the actors carried their own and provided well-rounded unique characters. We are certainly in a phase of strong female characters, but thankfully Amara Namani (Cailee Spaeny) steered clear of many of the stereotypes. She’s more than just a strong-headed female, and instead brings her unique talents to the team as a powerful asset. She and Boyega portrayed a realistic type of friendship, which added to the comedic and sarcastic moments they had on screen. While I have no complaints about the acting of Charlie Day, who portrayed Dr. Newton Geiszler, it’s always hard to take his work serious alongside the many comedic works he has done.

The film does a great job of teaching the basics of the original film again to those new to the series. While I hadn’t seen the original Pacific Rim in quite some time, I quickly picked up where I had forgotten. The film gives enough time to remind and review without wasting valuable screen time.

Visually, the movie uses a massive amount of computer graphics and green-screen. That, of course, is expected when you are having massive alien creatures annihilating cities. I do believe the movie used green screens sparingly when possible. Whenever computer graphics were used, they were very high quality. Fans of Michael Bay-type films will enjoy the utter destruction in this film.

Overall, fans should love this next step into the series. The film offers a surprising plot twist, a plethora of laughable moments, and a large assortment of hard-hitting action scenes. This will be a worth-while film for returning fans and those seeking a sci-fi action film.

Pacific Rim: Uprising is rated PG-13 for sci-fi violence and language. The film in total is one hour and 51 minutes and has no extra scenes during or after the credits.