Movie Review: ‘Rogue One’ – A Star Wars Story worth telling 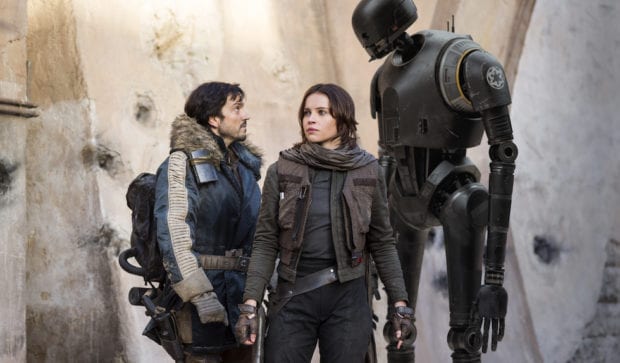 “Rogue One” is an excellent Star Wars story starring a bunch of characters you don’t know. As a stand-alone film, it’s definitely worth seeing, even if you’re not a big Star Wars fan.

If you are a big fan like me, then you probably already know the plot of “Rogue One”. The very first Star Wars movie, “A New Hope”, which came out in the late ‘70s, starts off with Darth Vader boarding a rebel ship, looking to take back the stolen plans for the Death Star before Princess Leia and the Rebels use them to figure out how to attack the planet killer. Rogue One tells the story of how those plans were stolen, and it’s interesting. If you haven’t seen “A New Hope”, sorry for the spoilers (but the Rogue One crew do successfully steal the plans). 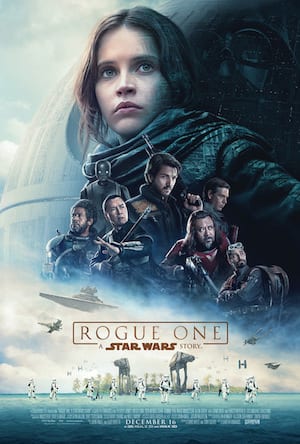 This Star Wars movie starts abruptly for those expecting the opening story crawl you’ve seen in all the other films. Remember, although this movie fits in with the middle set of the three trilogies, it’s not a part of that story.

We start with a mom, dad and daughter scrambling to hide from something they expected to be coming. The father, Galen Erso (Mads Mikkelsen), used to work for the Empire and helped them get started with building the Death Star before he retired to a beachside abode, and now the Empire wants him back to help them complete it. But he knows they won’t take in his family, so he has his little daughter Jyn Erso (Felicity Jones) hide until his friend Saw Gerrera (Forest Whitaker) can take her to safety. – I know, it’s a lot of unusual names you’ve never heard, and there’s a lot more, but you don’t really need to keep track of all of them to follow the story. – Flash forward about 15 years and Jyn is all grown up and is found by the Rebels, as they need her help finding her father. He’s sent a message to Saw through a pilot who has defected from the Empire.

Cassian Andor (Diego Luna) and his droid K-2SO (Alan Tudyk) are sent to find Jyn and take her to Saw, who she hasn’t seen in many years. Along the way they meet others who join them on their journey to steal the Death Star plans.

Because most of the characters are new, I didn’t have the connection to them as with the other movies. That doesn’t make it a bad movie, but it does make it not quite as enjoyable. There are quite a few cool references and cameos throughout (such as blue milk) that fans will catch. But there is a part of the movie I really didn’t like. I won’t go into detail on who it is, but they have a couple of human characters you know from the original trilogy in “Rogue One”, although not really. For one reason or another, their faces are computer generated and you can tell. Although they look a bit better than how the humans looked in “The Polar Express” movie, not by much. I wish they’d gone with old footage or another actor playing the role (like they did with Mon Mothma) instead. It seems like moviemakers can make just about everything look hyper-realistic in CGI except human faces.

Overall it’s great to be back in the Star Wars world, battling Stormtroopers, Darth Vader and the whole Empire. The acting is great. I liked the pacing, and it’s action-packed. It’s a must-see movie that brings some extra details to the main films. It makes me excited to see the other Star Wars Stories Disney has planned.

“Rogue One” is rated PG-13 and runs about two hours and 15 minutes long. It’s available in 3D, although I didn’t see it that way, so I can’t tell you if I think it’s worth the extra dollars. There are no end-credit scenes.

In the Parks
Disney’s Hollywood Studios is where you’ll want to head for all things Star Wars. There you can ride Star Tours, watch kids train to be Jedi, see the March of the First Order and A Galaxy Far Far Away stage show, meet Chewbacca and Kylo Ren and see props in the Launch Bay and end the night with A Galactic Spectacular projection and fireworks show. As far as Rogue One specific attractions go, look for a room of Rogue One props in Launch Bay and the black Stormtroopers known as Death Troopers in the Far, Far Away show.
In a few years, you’ll be able to visit a Star Wars land at Hollywood Studios and Disneyland.