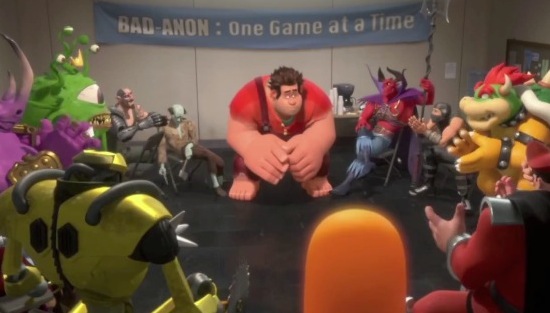 A classic look with a new twist, Wreck-It Ralph follows Ralph, the “bad guy” of the arcade game Fix It Felix Jr., through his journey to prove that he’s much more than he was programmed to be.

After attending a Bad-anon meeting between familiar faces, Ralph returns home to discover that everyone in his game is celebrating their 30 year run without him. Distraught, he crashes the party and discovers that the only way to get the approval of the citizens of Niceville is with a Hero’s Medal; something that no bad guy can ever get.

Frustrated, Ralph leaves his game and discovers Hero’s Duty, a game that awards a medal to the player that reaches the top of the building. However, Hero’s Duty isn’t free from dangers, and Ralph accidentally awakes a dormant swarm of Cy-Bugs. While stumbling around, he (and one tiny Cy-Bug) fall backwards into an escape ship and are transported to Sugar Rush, the local go-kart style game that boasts new players every day. They crash land, and the Cy-Bug seems to have perished in the taffy swamp.

It’s here that Ralph meets Vanellope Von Schweetz. She’s a glitch whose only desire is to race. Vanellope coerces Ralph into helping her enter the next day’s race, but King Candy, the local ruler of the game, announces that she is not allowed to race under any circumstances. If she races and wins, she’ll be added to the Random Racer roster and as a glitch, if the players see her glitching, the game’s plug might be pulled.

I won’t go into any more than that, because I don’t want to give away any spoilers, but I will say that this movie is definitely family fun and heartfelt. It had me laughing, and even crying at some points. It’s definitely worth going to see at least once in theaters and once it comes out on DVD/Blu-Ray. You can bet that I will be purchasing it on the day it comes out.

It left me with just one question: When can I see it again?

Here’s a look at Ralph and Vanellope meeting guests at Disney’s Hollywood Studios:

Also at Hollywood Studios is this production gallery from the making of the film: