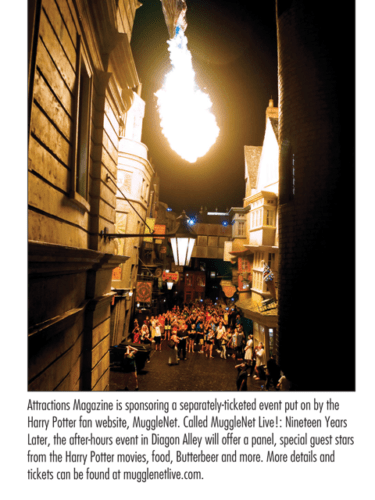 If you’ve ever dreamed of staying in the Wizarding World of Harry Potter after park hours with just a few hundred close friends and some VIPs from the films, mark your calendar for September 1, when the MuggleNet Live Nineteen Years Later will take over Diagon Alley for the evening.

The MuggleNet Live: Nineteen Years Later event, which is being co-sponsored by Attractions Magazine, is a private party inside Diagon Alley at Universal Studios Florida. Attendees will have unlimited access to the shops and establishments of Diagon Alley, including the Leaky Cauldron, Weasleys’ Wizard Wheezes, the Gringotts Money Exchange, and Ollivanders wand shop. Knockturn Alley will be open for exploration, as will the land’s signature thrill ride, Harry Potter and the Escape from Gringotts, and Celestina Warbeck and the Tales of Beedle the Bard performances will be held in Carkitt Market. Guests will also be able to travel between King’s Cross Station and Hogsmeade Station on the Hogwarts Express, though Hogsmeade and the Forbidden Journey attraction will not be open during the event.

Event admission also includes 1 1/2 hours of buffet dinner service during the event, along with beverages — including Butterbeer — throughout the evening.

Tickets for the MuggleNet Live event are on sale now starting at $185 with a current social media presale discount. For $345 to $934, a limited number of guests can ride Escape from Gringotts and/or experience Ollivanders alongside a VIP. Regular Universal Orlando theme park admission is not required to attend.

For more MuggleNet gatherings, watch these videos of their official tributes to the late actors John Hurt and Alan Rickman during past Celebration of Harry Potter events:

A Universal Christmas jingles its way into...