Mythbusters: Behind the Myths Tour coming to the UCF Arena 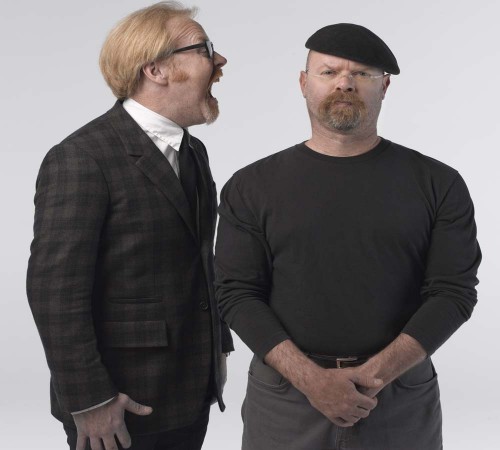 MythBusters: Behind the Myths tour is coming to the UCF Arena at 8 p.m. on Friday, Oct. 12. The show consists of an evening of on-stage experiments, audience participation and behind-the-scenes stories from the hit TV show.

MythBusters: Behind the Myths will bring the audience face-to-face with the curious world of Jamie and Adam as the duo matches wits on stage with each other and members of the audience. Last winter and spring, the show performed 28-city national tour playing sold out performances all over the country. One of the Discovery Channel’s most highly regarded and watched series, MythBusters is now in its ninth season. Co-hosted by Hyneman and Savage, MythBusters mixes scientific method with gleeful curiosity and plain old-fashioned ingenuity to create its own signature style of explosive experimentation and the supporting or debunking of urban myths that we live with day-to-day.

Mythbusters and Legend of Zelda coming to Dr....

Bust a myth during Mythbusters: The Explosive Exhibition...

Phineas and Ferb’s live show is coming to...

Disney’s Phineas and Ferb tour coming to the...

I went to see the show on Friday, 10/12/12 and was highly disappointed. I’ll be specific as to the reason. The guys decided to choose an audience member or two for every single ‘experiment.’ I’ve always found this annoying because most of the time, non-performers are just awkward and kind of…DUH…on stage. From the beginning, various components of the props were not working correctly and the audience sat idely by during their failed attempts to make repairs. I felt badly for their situation but at the same time, my good sense tells me that if you’re to run a show, everything should be tested and fine-tuned before EVERY performance. It’s just a standard of professionalism. The majority of the first half of the show (a little over an hour) consisted of a lot of rambling, probably to stall the audience. I’m not referring to Jamie’s Q&A because that was probably the highlight (aside from handing a kid a phone book and telling them that’s what the Internet used to look like). Then there were the big screens, like there usually is at a show. The projector malfunctioned a couple times, cutting video short and then replaying videos from the beginning again. The screens never showed what was happening on stage and sound quality coming from the guys’ microphones was poor enough that the people in the back were a bit confused by the idea behind the experiments. Yes, I sat in the back on the balcony- nose-bleed seats. But, UCF arena is not Madison Square Garden. Aside from the fact that I used a camcorder with an amazing zoom. I’m not sorry we didn’t pay more for better seats, though. It was 100 bucks for the two of us to sit in those back seats and the show would not have stunk any less if our seats were better! I love Science, I love comedy, I love creativity, and I still like the MythBusters! It’s my opinion, however, that Jamie and Adam are better off keeping their show on the silver screen. The nature of what they do best becomes far too modified for a stage. Furthermore, it is evident there is poor planning and coordination involved for their stage show. Conducting a live show requires a completely different mindset because you cannot do any editing and I’m not sure they’ve quite grasped this notion. Following the “ten minute” intermission that lasted nearly a half hour, I decided it was best to duck out and head for some sushi and margaritas. The sushi and margaritas were fabulous.