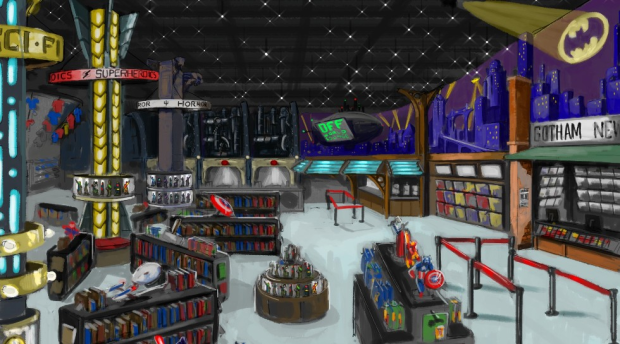 Artegon Marketplace Orlando has signed a five-year lease with Gods & Monsters, the first high-end, innovative comics and collectibles store of its kind and the second-largest comic, collectibles and gaming facility in the country.

“ Gods & Monsters will change the perception of what a comic and toy store can be,” said co-founders Todd Fisher and Anna Young. “Forget boring racks of worn out back issues and the same old action figures gathering dust in shoddy displays. We’re doing something different.”

Gods & Monsters will offer the genre’s most sought-after merchandise including new and rare releases, import items and vintage collectibles. The decor is being created by scenic effects artists whose portfolios include Central Florida’s world-famous theme parks and attractions.

Other features of the 18,898-square-foot facility include:
• The Transmetropolitan Gallery – A pop-culture, fine art gallery featuring an ever-changing array of top quality comic and media themed art, including sculpture, paintings, custom toys and original comic art from local, national and international artists.
• The Offworld L.O.U.N.G.E. – A Sci-Fi gaming lounge, heavily inspired by the movie Blade Runner, where guests can enjoy flavored iced coffees, artisan sodas and themed snacks while facing off in a round of Cards Against Humanity or wrecking the noobs at Super Smash Bros as they chow down on udon noodle cups at the White Dragon Noodle Bar.
• An interactive app that will provide access to hidden content throughout the store and beyond (to be released during phase II).
• Special events such as creator signings, movie premieres and conventions where fans can meet their favorite writers, artists and stars.

Co-founders Todd Fisher and Anna Young have been in the comic and toy retail business for nearly 40 combined years. Multiple winners of ‘Best of Orlando’ awards, the two have operated some of the region’s finest and best loved stores and galleries including Acme Superstore in Longwood, A Comic Shop in Winter Park, Tekno Comix in Altamonte Springs, and Park Avenue Fine Art and Russell-Alexander Fine Art in Winter Park.

For more about Artegon Orlando Marketplace, watch the Oct. 14, 2014 episode of Photo Finds: