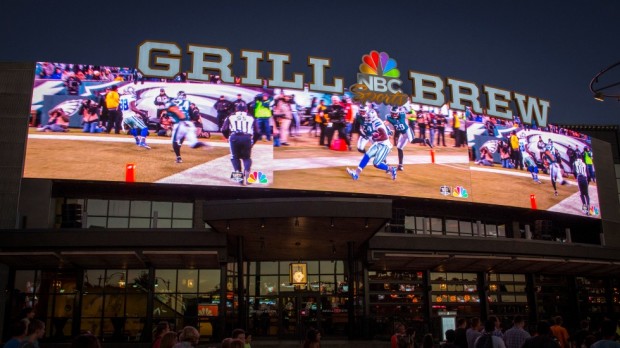 The all-new restaurant features:
• A massive, more-than-120-foot-wide HD stadium screen that towers over the entrance of the restaurant and plays some of the greatest moments in NBC Sports history
• Nearly 100 HD TV screens, so every fan can enjoy the best in live and in-depth sports coverage no matter where they sit
• A menu featuring more than 75 items, including everything from the best in game day food like the “Grand Slam” burger and fire grilled chicken wings to filet mignon, grilled shrimp skewers, fresh salads and even a seven-layer “Big Banana Cake”
• Open-fire grills in the heart of the restaurant, so everyone can watch the chefs in action
• More than 100 unique beer selections, ranging from craft beers to regional brews to 862 Orlando – an exclusive draft you can only find at this restaurant

NBC Sports Grill & Brew is located just outside the entrance of Universal Studios Florida. For more information, visit UniversalOrlando.com. See our coverage on the Oct. 29, 2015 episode of Orlando Attractions Magazine: The Show.