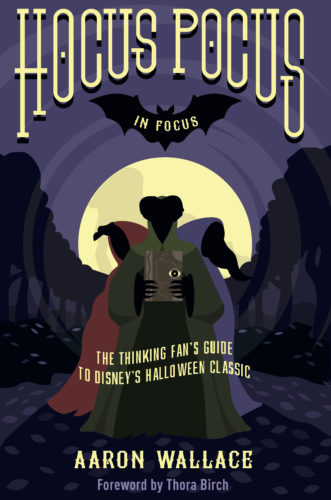 A new book dedicated to the Disney film ‘Hocus Pocus’ has hit shelves in time for Halloween.

Hocus Pocus in Focus: The Thinking Fan’s Guide to Disney’s Halloween Classic, a newly released book by author Aaron Wallace, is the first to dive deep into every aspect of the cult favorite film.

“Something has changed,” Wallace says. “Far from the forgotten relic it was destined to become, Hocus Pocus has taken its place alongside The Wizard of Oz, Harry Potter, and Home Alone — a bona fide classic that’s sure to stay alive for generations to come.”

Aaron Wallace began his career as a lawyer, but he eventually returned to his undergraduate background in literature and film studies. His first book, The Thinking Fan’s Guide to Walt Disney World: Magic Kingdom, was a Top Ten bestseller on the travel lists at Barnes & Noble, Apple, and Amazon.com. Now, Wallace turns to Hocus Pocus, offering a lighthearted but scholarly look at the movie “in all its spooky-kooky glory,” as he puts it.

Readers will learn:
• The fascinating history behind “I Put a Spell on You” and “Come, Little Children (Sarah’s Song)”
• How Steven Spielberg shaped the movie
• Why sexuality plays such a prominent role in the story
• Insider secrets from the making of the movie
• The clever hidden meanings in Walt Disney World’s Hocus Pocus Villain Spelltacular
• And much, much more

The book features a foreword by Thora Birch, who played little Dani in the movie. Birch is the Emmy and Golden Globe-nominated star of such films as American Beauty, Ghost World, Now and Then, Clear and Present Danger, USA Network’s “Colony,” and three films set for release in 2017: The Etruscan Smile, Above Suspicion, and political thriller Public Affairs. Hocus Pocus writer and producer Mick Garris also provides an afterword for the book, detailing the creative process that turned a spooky children’s bedtime tale into a generational gem. Garris is well known for his work on Batteries Not Included, Showtime’s “Masters of Horror,” and Steven Spielberg’s “Amazing Stories.”

“Having Thora and Mick on board for this project means the world to me,” Wallace says. “I truly grew up with this movie — and with so much of their respective filmographies — so to have them taking a personal interest in my work now is beyond rewarding. As a Hocus Pocus fan myself, I know readers are going to be over the moon with the insights Thora and Mick are sharing in this book for the very first time.”

Wallace also uncovers the largest collection of Hocus Pocus fun facts and trivia ever assembled, and he pairs them with movie recommendations culled from Bette Midler’s filmography, the Disney vault, and beyond. “I have to admit I didn’t know some of the facts and connections I uncovered while researching this book,” he says. “It’s enough to blow a Halloween movie fan’s mind!”

Hocus Pocus in Focus is available at Amazon.com, on a variety of eBook formats, and in select bookstores, just in time for the 2016 Halloween season. The author also offers signed copies through his website, AaronWallaceOnline.com, where the book is also available in discounted bundles with his other titles. Later this year, Wallace is set to release his third book, The Thinking Fan’s Guide to Walt Disney World: Epcot. Neither book is affiliated with The Walt Disney Company or its affiliates or subsidiaries.

“I’ve been a Hocus Pocus fan a lot longer than I’ve been an author,” Wallace says, “and even though I wrote it, I know this is the type of book I’d have gone crazy for. I think fans are going to walk away loving the movie even more than they knew. In the film, Winifred Sanderson (Bette Midler) clings to her spell ‘BoooOOOoook’… now we fans have a Hocus Pocus ‘BoooOOOoook’ to call our own.”