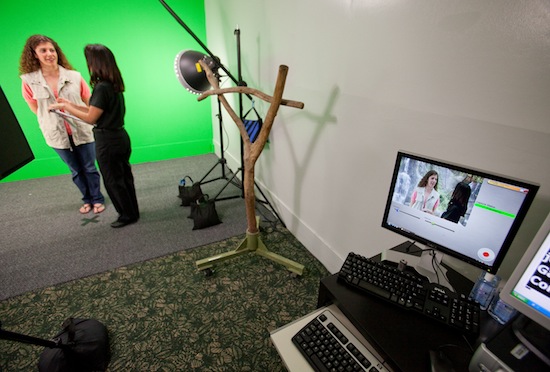 Have you ever wondered how much concentration it takes for someone like Jack Hanna or Julie Scardina to do a television interview while holding a cute but squirmy animal? How do you focus on what you’re saying when you’ve got an owl monkey nuzzling your neck or a bush baby climbing on your head? The new Animal Connections experience at Busch Gardens Tampa Bay gives guests the opportunity to find out first hand what it takes to be an Animal Ambassador.

The 30-minute experience treats each new talent like a television star. Upon arriving, the guest is assigned a personal “production assistant” to guide them through their on-camera experience. After shooting a “head shot,” the guest is escorted to wardrobe and given the opportunity to freshen their makeup and hair in the green room. 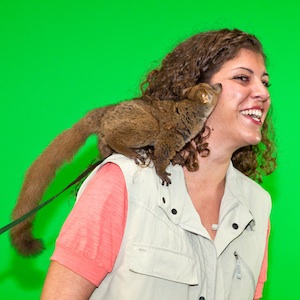 Depending on whether the guest chooses “African Adventure” or “Rainforest Discovery,” they will be assigned one of Animal Connections’ furry or feathered co-stars, which include lemurs, owl monkeys, bush babies, macaws, porcupines and other exotic species. They are given several minutes to study a script full of facts about the animal they’ll be presenting.

Then it’s into the studio, where green-screen technology places the guest into his or her animal’s natural habitat. After taking a few minutes to acclimate to the animal, the script scrolls on the teleprompter, and the director rolls camera. A one-way glass allows friends and relatives to view the taping and take photos of their star’s performance.

Whether the guest gets it in one take or has to try a few more times, the result is a DVD of the performance bookended with some Busch Gardens animal footage.

Animal Connections is $29.99 per taping, which guests can do alone or as a couple. The price includes a DVD of the performance. It is located in the Crown Colony Plaza area of the park, between Edge of Africa and Egypt, where the Clydesdale horses used to be housed.

SeaWorld Orlando is expected to also add a green-screen video attraction once their horses leave the stables at the end of this month. This attraction is rumored to allow guests to have their faces painted and be superimposed on a safari adventure.

Both Busch Gardens and Seaworld announced that they would no longer have horses on display when The Blackstone Group purchased the parks from the Anheuser-Busch InBev company last year.