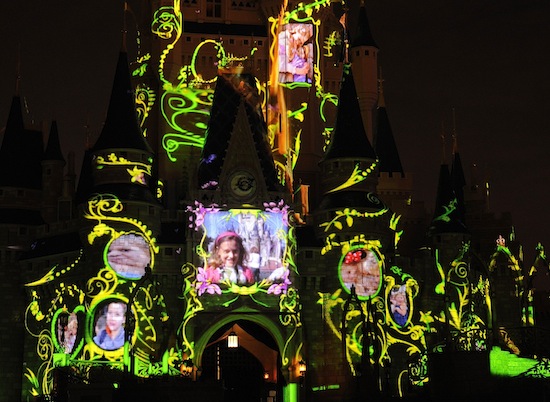 A dramatic new projection show filled with special effects is starting tonight at the Magic Kingdom. Cinderella Castle will transform into a shimmering canvas for images and special effects.

The ten-minute experience called “The Magic, The Memories, and You!” will dazzle park guests with playful animated sequences that seem to defy the architecture of the buildings. The spectacle is scheduled most nights with up to two shows per night depending on theme park operating hours and other special ticketed events.

As many as 500 PhotoPass guest images shot that day will also project onto the castle during the show, producers estimate. “Disney parks create family vacation memories to last a lifetime,” said Meg Crofton, president of Walt Disney World Resort. “What better canvas for those memories than Cinderella Castle, one of the most photographed icons in the world.”

After the sun goes down, 16 high-powered state-of-the-art projectors will bring the castle to life as that day’s photos (and videos taken from Disney’s “Let the Memories Begin” online hub) seem to dance about the famous facade, explained Alan Bruun, associate creative director, Walt Disney World Entertainment. “The images dance to the music and culminate in a spectacular finale punctuated by animated and actual fireworks,” Bruun said.

The Magic, The Memories and You castle projection show on Cinderella Castle at Walt Disney World

Is this replacing Wishes?

I’ll be curious to see how this looks in person – the concept sounds like it could be kinda gaudy, but after watching the video, it might be ok depending on how well it’s executed and how easily you can see the videos if you’re not directly in front of the castle at the hub.

Any idea where this fits into the daily schedule? I don’t see anything on the calendar at disneyworld.com.

It’s not replacing Wishes. It plays about 10 minutes before Wishes starts each day.