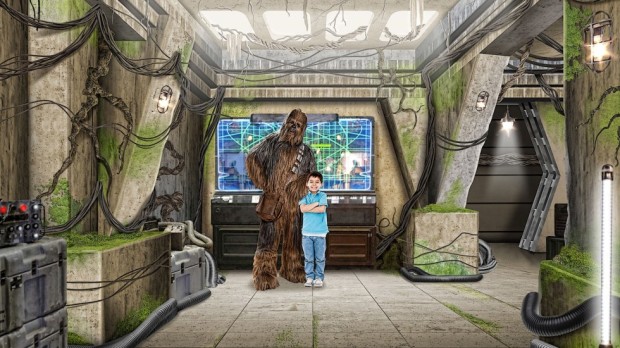 The Force will soon be strong with guests at Disney’s Hollywood Studios with the addition of new Star Wars-inspired entertainment arriving in December and January.

The Star Wars themed entertainment will include new experiences as well as reimagined elements of popular Star Wars attractions at Disney’s Hollywood Studios, starting Dec. 1 – just ahead of the Dec. 18 movie premiere of Star Wars: The Force Awakens.

Additional Star Wars elements enter the galaxy at Disney’s Hollywood Studios starting Jan. 5, 2016, such as First Order stormtroopers patrolling the park, Star Wars-inspired food and beverage offerings, plus a fireworks show called the “Symphony in the Stars: A Galactic Spectacular.’’  (UPDATE: The First Order Stormtroopers and foods and beverages have already started and the fireworks will start Dec. 18)

Star Wars Launch Bay
Located in Animation Courtyard, Star Wars Launch Bay will be a primary location within the park for fans to celebrate all things Star Wars. In this multi-sensory space with an outdoor queue area lined with special concept artwork, guests can interact with  Star Wars characters, tour galleries featuring treasured memorabilia and replicas of large-scale Star Wars artifacts, including ones from Star Wars: The Force Awakens, and play the latest Star Wars interactive video games, plus have access to special Star Wars merchandise.

• Special Character Encounters: After entering a themed atrium complete with replicas of Star Wars props, guests can journey to the dark side and encounter Star Wars characters such as Darth Vader in a 360-degree immersive area themed around the Star Destroyer, or they may choose the light side by stepping into a makeshift Rebel base and coming face to face with Star Wars characters such as the most famous co-pilot in the galaxy, Chewbacca.

• Launch Bay Theater – Guests hear directly from the creative minds behind the Star Wars saga in a short video that includes exclusive interviews with the directors, writers, producers and other key movie crew members who bring the saga to life.

• The Cantina – This setting, inspired by the unsavory “hives of scum and villainy” in the Star Wars galaxy, is a place to explore and take photos near elements of the cantina, such as a holochess table. Holochess is a game seen in Star Wars.

• Themed Galleries – Special immersive galleries will be located throughout Star Wars Launch Bay. They include:
– Celebration Gallery will feature iconic ships from throughout the Star Wars saga, such as memorable ones of the Rebel Alliance and the Imperial Navy fleet.
– Celebration Hallway will display large-scale replicas of Star Wars props amid scenic murals.
– Preview Gallery will offer guests exclusive looks at replicas of props, artifacts and memorabilia from the latest movie in the saga, starting with Star Wars: The Force Awakens. Among the items that will be on display are costumes, ship models, droids and artwork.

Star Wars: Path of The Jedi
Guests looking to relive the stories from the Star Wars saga or be introduced to the iconic characters, including ones from Star Wars: The Force Awakens, can watch an abridged, cinematic reel celebrating the Star Wars saga (episodes I-VII) in a theater setting near Echo Lake.

Star Tours – The Adventures Continue
Fans of this attraction will experience journeys involving new characters and adventures from Star Wars: The Force Awakens. The new scenes have already soft opened for guests, read a spoiler-filled description on our blog.

Jedi Training: Trials of the Temple
This popular entertainment offering is being reimagined with new characters and a new villain to battle from Star Wars Rebels. Younglings will be guided to the site of a secret and ancient Jedi temple where they will face villains such as Darth Vader and the Seventh Sister Inquisitor from the Disney XD series Star Wars Rebels, and discover if they have the makings of a true Jedi.

Stormtrooper Patrols
As guests enjoy the sights and attractions of Disney’s Hollywood Studios, they may come face to face with First Order Stormtroopers who will patrol various areas of the park, interacting with guests during their mission to find members of the Resistance.

“Symphony in the Stars: A Galactic Spectacular’’
Starting Jan. 5, 2016, guests will be treated to a spectacular finish to their visit to the park involving a Star Wars-themed fireworks show set to memorable Star Wars music from throughout the saga.

Galactic Food
Guests can experience Star Wars through their palates. Various novelty items and specialty foods inspired by a galaxy far, far away, such as Blue Milk Panna Cotta, Padawan Limeade, BB-8 Lemon and Butter Cream cupcake and a Han Solo Souvenir Kid’s Meal served in a Han Solo-themed bucket, will be available at various locations inside Disney’s Hollywood Studios. Guests will soon be able to purchase admission to a dessert party during the fireworks show featuring themed desserts, specialty drinks and a souvenir Chewbacca stein.

Some of the happenings above are already running at Disneyland as part of their “Seasons of the Force” event, including Hyperspace Mountain (see video below). The events at Hollywood Studios were originally also billed as “Seasons of the Force”, but that name is now exclusively being used at Disneyland. Because of all these new events and the planned construction of the Star Wars land, Star Wars Weekends has been canceled.