Shanghai Disneyland details revealed, including Tron roller coaster and many other Disney firsts 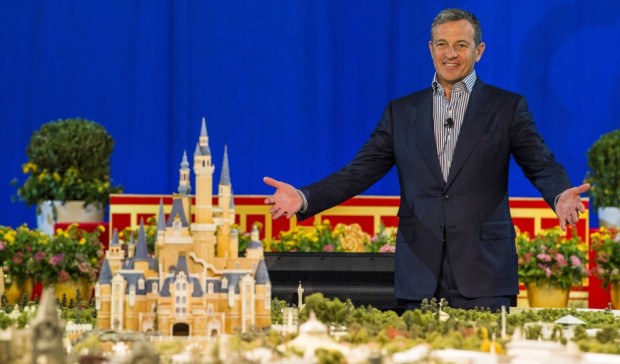 The Walt Disney Company has unveiled key elements of Shanghai Disneyland, including its six themed lands and live entertainment, many of which are a first for a Disney park.

Disney Chairman and CEO Bob Iger revealed a scale model of the theme park and displays showcasing highlights of unique attractions, entertainment, dining and hotels at a presentation today at the Shanghai Expo Centre. 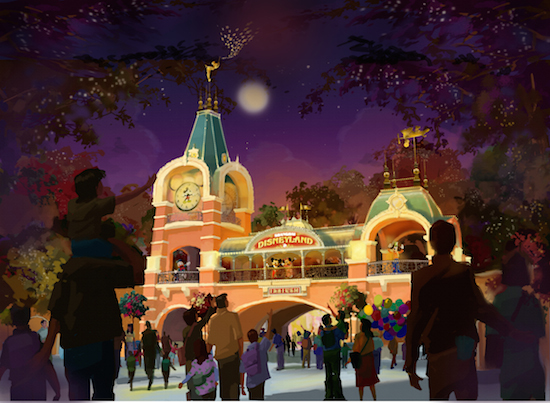 Shanghai Disney Resort guests will be immersed in popular Disney stories that come to life at the largest castle in a Disney park, at the first pirate-themed land in a Disney park, on the longest Disney Parks parade route and in more enchanting places filled with thrills, creativity and adventure. 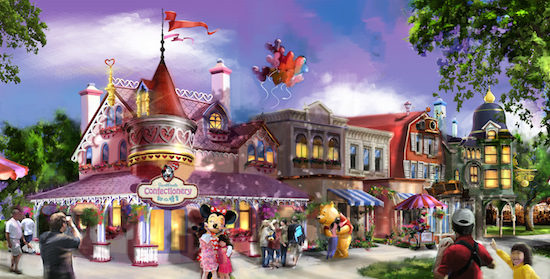 Mickey Avenue is the first main entry at a Disney park inspired by the colorful personalities of Mickey Mouse and his pals. In the neighborhoods of this whimsical avenue, guests will share a hug and get a photo with some all-time favorite Disney characters. Avenue M Arcade, one of the many shops along the avenue, will feature the largest selection of gifts and collectibles inside the theme park.

Gardens of Imagination celebrates the wonders of nature and the joy of imagination. Guests will take a spin on the Fantasia Carousel, soar on the back of Dumbo the Flying Elephant and enjoy the area’s iconic Disney entertainment, including castle stage shows and “Ignite the Dream, a Nighttime Spectacular of Magic and Light.” From several places in this land, guests will enjoy “Mickey’s Storybook Express,” a parade with its own musical soundtrack and colorful performers on the longest parade route in a Disney park.

Fantasyland, inspired by Disney’s animated films, will be the largest land and home to the Enchanted Storybook Castle. Guests will experience familiar Disney stories as they ride Voyage to the Crystal Grotto, go in and out of tunnels glowing with dazzling diamonds on Seven Dwarfs Mine Train and take flight over the skies of London on Peter Pan’s Flight. They may also explore the Hundred Acre Wood with Winnie the Pooh or follow Alice through a Wonderland maze. 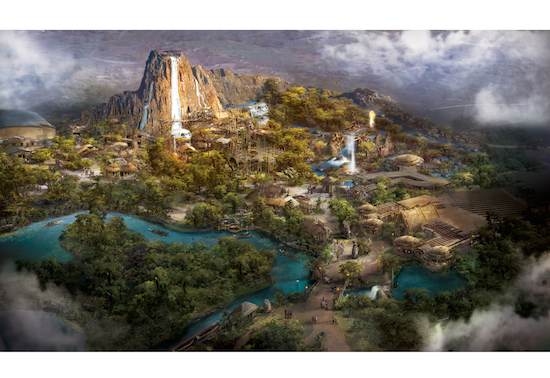 Adventure Isle will immerse guests in a newly discovered lost world, filled with hidden treasures. The mighty Roaring Mountain will tower over guests and they may blaze their own trails at Camp Discovery, travel around the world on Soaring over the Horizon or embark on the thrilling rafting adventure through the heart of Adventure Isle on Roaring Rapids. 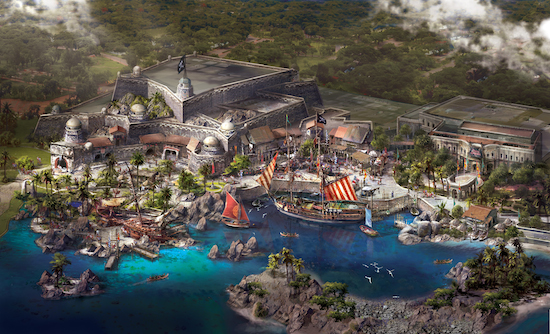 Treasure Cove will be the first pirate-themed land in a Disney park, a place to join the adventures of Captain Jack Sparrow and Davy Jones. As guests explore this pirate world, they will enter Pirates of the Caribbean – Battle for the Sunken Treasure, an attraction that transforms a boat ride into a journey with cutting-edge innovations in robotics, animation, set design and multimedia. Guests will board a pirate ship, paddle through the scenic cove on Explorer Canoes and dine at Barbossa’s Bounty.

Tomorrowland celebrates the limitless possibilities and optimism of the future in Shanghai. Disney’s innovative use of technology has produced a land where guests will go to infinity and beyond on Buzz Lightyear Planet Rescue, a new space ranger adventure, or break the bonds of gravity on Jet Packs. A massive, color-shifting canopy will lure guests to TRON Lightcycle Power Run, a coaster-style attraction where guests board a train of two-wheeled Lightcycles for one of the most thrilling adventures at any Disney park. 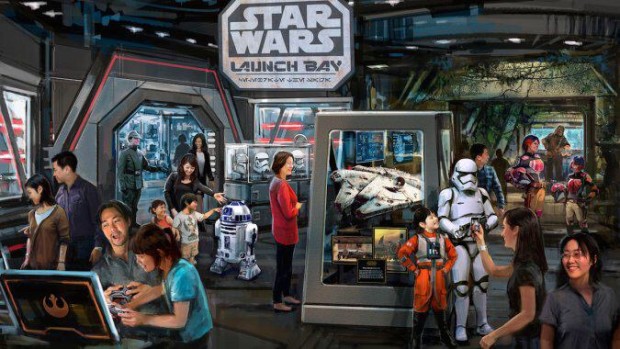 Nearby Tomorrowland will be two experiences created especially for Shanghai Disneyland – Star Wars Launch Bay and Marvel Universe. In a celebration of the Star Wars Galaxy, guests will meet heroes and villains of the saga, visit iconic intergalactic set-pieces, view props and memorabilia from the most recent episode, and be immersed in the Skywalker story through a state-of-the-art cinematic experience. In Marvel Universe, guests attend a multimedia mission briefing on the world of Marvel, get up-close with some popular Marvel Super Heroes and take on the role of comic book artist as they learn to draw some favorite characters.

At night, the sky above Enchanted Storybook Castle will be painted in dazzling light, with music, special effects and fireworks, adding a special “kiss good night” for all the guests at Shanghai Disney Resort.

At the center of Shanghai Disneyland, the iconic Enchanted Storybook Castle will be the tallest, largest and most interactive castle at any Disney theme park. It’s also the first castle in a Disney theme park that represents all the Disney princesses.

Other “firsts” at Shanghai Disneyland will include:
• Adventure Isle, a mysterious land, with an ancient legend about a native tribe, a giant, reptilian creature, and the mighty Roaring Mountain.
• Voyage to the Crystal Grotto, an enchanting, new excursion that celebrates classic Disney tales of magic and imagination as it travels the waters of Fantasyland, going underneath Enchanted Story Book Castle for a finale never before seen inside a castle.
• Tomorrowland, a venue with an original design and new attractions to celebrate the hope, optimism and potential of the future, created especially for the people of China.
• TRON Lightcycle Power Run, which promises to be one of the most thrilling attractions at a Disney park, with a twisting, turning track, high speeds, rich storytelling and a breathtaking view of Shanghai Disneyland.
• Garden of the Twelve Friends, where animals of the Chinese zodiac are re-imagined as Disney and Disney-Pixar characters.
• Treasure Cove, the first pirate-themed land at a Disney park, leveraging innovative technologies in the new Pirates of the Caribbean – Battle for the Sunken Treasure and a stunt show spectacular featuring Captain Jack Sparrow. 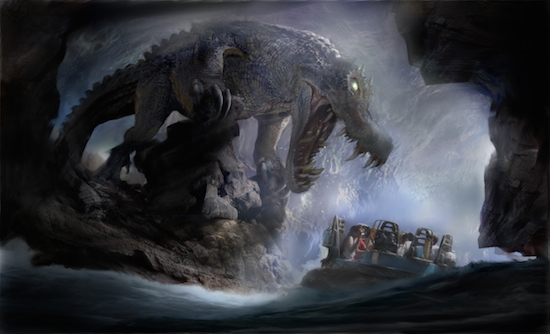 “We are building something truly special here in Shanghai that not only showcases the best of Disney’s storytelling, but also celebrates and incorporates China’s incredibly rich heritage to create a one-of-a-kind destination that will delight and entertain the people of China for generations to come,” said Iger. “We are taking everything we’ve learned from our six decades of exceeding expectations – along with our relentless innovation and famous creativity to create a truly magical place that is both authentically Disney and distinctly Chinese.”

A joint venture of Disney and its partner Shanghai Shendi Group, Shanghai Disneyland is designed to appeal to Chinese guests – taking the best of Disney and delivering it in a way that is created especially for this audience. It will extend the 60-year legacy of Disney Parks around the globe.

Since breaking ground in 2011, Disney and Shanghai Shendi Group announced that they were expanding the park by adding additional attractions and entertainment to allow more guests to have a spectacular Disney experience at the grand opening in spring of 2016. 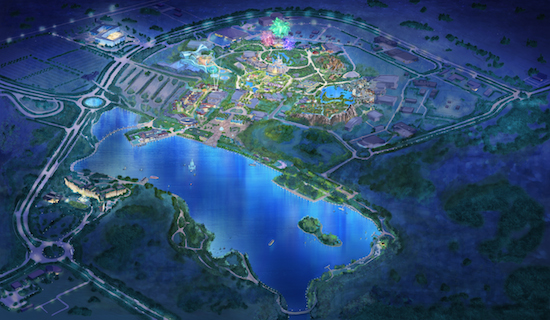 Shanghai Disney Resort, part of the Shanghai International Tourism and Resorts Zone, is a complete vacation destination and at opening will include:
• Shanghai Disneyland, a theme park with six themed lands: Adventure Isle, Gardens of Imagination, Mickey Avenue, Tomorrowland, Treasure Cove and Fantasyland, with its Enchanted Storybook Castle.
• Shanghai Disneyland Hotel and Toy Story Hotel, imaginatively themed and adjacent to the theme park.
• Disneytown, an international shopping, dining and entertainment district, adjacent to Shanghai Disneyland and including the Walt Disney Grand Theatre, home to the first-ever Mandarin production of the Broadway hit Disney’s The Lion King.
• Wishing Star Park, a central point of the resort with beautiful gardens, a walking path and a glittering lake.

The Shanghai Disneyland Hotel is an elegant Art Nouveau-inspired resort with a touch of Disney magic and imagination, while the Toy Story Hotel immerses guests in a world inspired by the toys from the Disney-Pixar series of Toy Story animated films.

Disneytown, a vibrant shopping, dining and entertainment district adjacent to the theme park, will be tailored to Chinese guests, with familiar experiences, colors, symbols and design integrated into the area, including traditional Shanghai Shikumen architecture. Disneytown is home to the Walt Disney Grand Theatre, the separate-ticket venue for the global premiere in Mandarin of Disney’s theatrical event, The Lion King, one of the most successful Broadway productions in history. Another “must-see” for guests will be the innovative World of Disney Store, offering a comprehensive collection of Disney merchandise, including many products designed especially for Shanghai Disney Resort.

Near Disneytown will be Wishing Star Park, offering guests an opportunity to enjoy greenery and a glittering lake. It includes Wishing Star Lake, a 2.5-kilometer walking path and various beautiful gardens.

For information about Shanghai Disney Resort, visit the official website at ShanghaiDisneyResort.com.

Get a detailed look at the construction and model for Shanghai Disneyland in the video below:

Photo Finds: A last look at The Magic Of Disney Animation