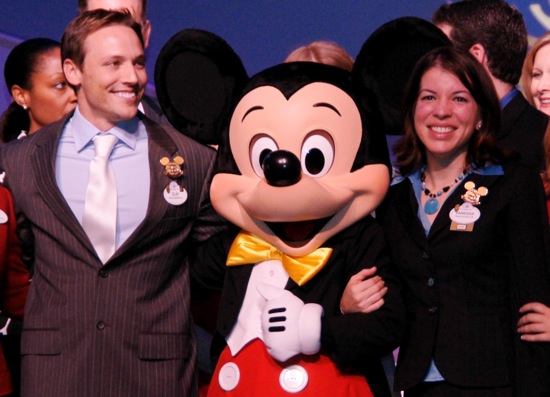 In a special ceremony this morning in the Premiere Theater at Disney’s Hollywood Studios, the 2009 Ambassador team was announced. Cast members Clay Shoemaker of the Magic Kingdom Dream Squad, and Vanessa Rosas of Industrial Engineering were named the 2009 Walt Disney World Ambassador team.

Clay began his career with Disney in 1994 at The Disney Store in Palm Beach Gardens. Two years later, during the 25th Anniversary Celebration, he joined the cast of Walt Disney World, greeting guests on Main Street. Clay has also worked in operations, sales, marketing and merchandise.

Vanessa, an industrial engineer originally from San Juan, Puerto Rico, was hired in 2000. In her eight years with Industrial Engineering, Vanessa has worked in many areas including child care, photo imaging, the college program, merchandise and food and beverage. She most recently worked in theme park operations.

For the full story and a behind-the-scenes look at Disney’s Ambassador program, be sure to read the upcoming Dec./Jan. issue of Orlando Attractions Magazine.

Concert and fireworks this Saturday at Kennedy Space Center