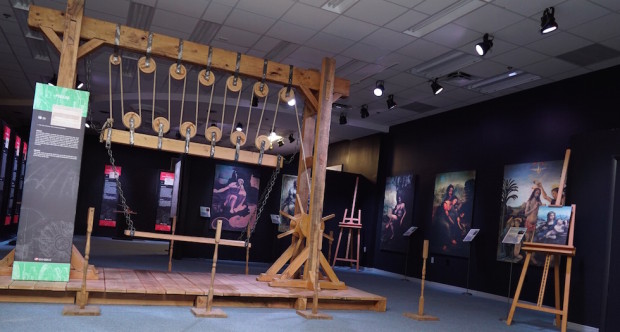 In April 1452, Leonardo da Vinci, a man of immeasurable genius and vision was born. In April 2015, he will make his way to Orlando, sort of.

Leonardo da Vinci: Man-Inventor-Artist-Genius is a unique, traveling exhibit offering a glimpse into one of history’s greatest minds. This exhibit features 40 models of his most innovative inventions, and 23 replications of his most famous artwork.

Detailed, interactive scale models of da Vinci’s inventions are divided among four representative Codices, or themes: Flight, Hydraulics, Mechanics and War Machines. Da Vinci’s machines demonstrate the progressive ideas of a genius well before his time. Guests will journey into an understanding of how these creations of over 500 years ago have become standard in our daily lives.

Explore the music of Leonardo da Vinci for the very first time – recreated by professors of the University of Music and Applied Arts in Vienna, Austria – while admiring replications of da Vinci’s artistic works, including “The Last Supper” and “Mona Lisa”. Presented in chronological order, this exhibit allows for a display of da Vinci’s evolution of thought and artistic progress.

“Leonardo da Vinci: Man-Inventor-Artist-Genius” has traveled the world, on display throughout the United States, Europe, Canada, Asia and Latin America. Guests are now invited to experience the works of da Vinci in Orlando. As Leonardo da Vinci once said, “experience is the source of all knowledge.”

A special Grand Opening event is being planned for April 18. Festivities will feature special guests including Mark Brisson from Skeletons: Animals Unveiled, and painting classes offered by Wine and Canvas. Food will also be provided by Tin Roof. This event is open to the public and is $20 at the door, which includes admission to the da Vinci exhibit, CSI: The Experience and Consumed by Art.

A social media scavenger hunt is also available. A “vandalized” Mona Lisa can be found within the building that houses the da Vinci exhibit. Take a photo showing how you think the painting was vandalized, then head over to Ripley’s Believe It or Not down the street and take a photo of two works of da Vinci that can be found inside their museum. Upload all these photos to Twitter or Facebook with the hashtag #IDriveDaVinci to be entered to win a special combination prize pack.

Admission into Leonardo da Vinci: Man-Inventor-Artist-Genius is $16.99 for adults and $9.99 for children ages 6-12, with 5 years and under free. Packages combining visits to CSI: The Experience are also available. Hours are 10 a.m. to 9 p.m. Monday through Saturday and 10 a.m. to 8 p.m. on Sunday.

Take a look inside the exhibit on the April 9, 2015 episode of “Orlando Attractions Magazine – The Show”:

Take a virtual ride on the world’s...