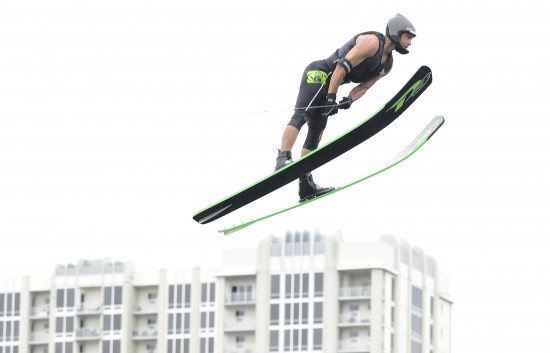 Combining extreme sports, family-friendly entertainment and music in the world capital of water skiing, “Soaked” will be a new extreme water sports festival coming to Orlando Sept. 7 and 8, 2012.

Some of the best athletes from around the word will hit the lake during the day for wake boarding and slalom skiing competitions. While in the evening, the grand finale will be a spectacular Night Jump set on an illuminated Lake Eola. Jumpers brave speeds up to 35 mph and then execute soaring leaps that can reach over 200 feet high.

“The City of Orlando is excited to host Soaked this fall and bring our residents another entertainment option and provide continued economic impact to our local businesses in Downtown Orlando,” said Orlando Mayor Buddy Dyer.

In addition to the water sports competition, the festival will include stages for concerts, car shows, motorcycle shows, carnival rides, kid attractions, and food and beverage stations. Tickets will cost $15 per day and can be purchased at soakedorlando.com.

Fun Spot America is having a birthday...