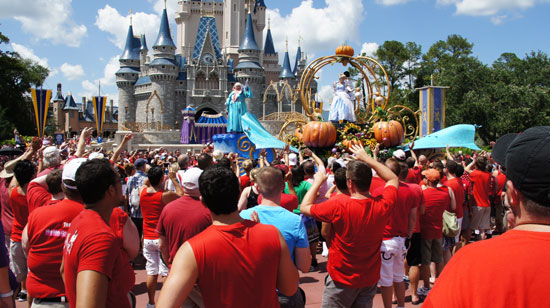 Thousands of Orlando’s biggest theme park fans were in town this weekend for Gay Days. Here’s a sample of the weekend’s events.

“Red shirt day” at the Magic Kingdom is the most well-known aspect of the weekend. It’s how the weekend began. Twenty-two years ago friends on the Internet decided to do a day at the park. They had never met in person, so the suggestion was to wear red so they could see each other. The tradition continues today.

And to this day there is nothing official about the weekend. Currently four different companies arrange for exclusive hotels, and nighttime parties. Unfortunately, the weekend has grown too large for us to report on completely! An example of the growth is that one of the I-Drive area hotel pool parties has grown so big that it now has off-site parking and shuttle buses at the Orange County Convention Center. 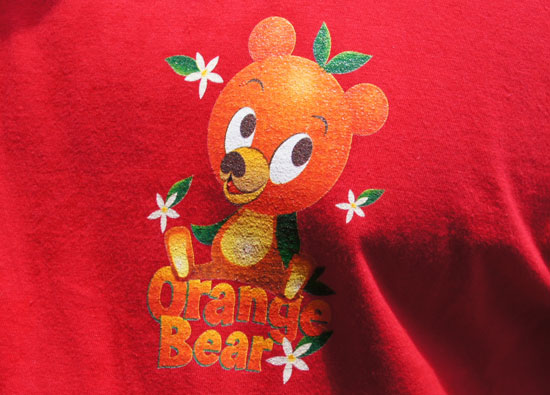 Examples of Gay Days attracting some of Orlando’s biggest fans are these fan-made shirts. Orange Bird was just recently re-introduced to the Magic Kingdom and is a big hit. So popular that fans made this parody. 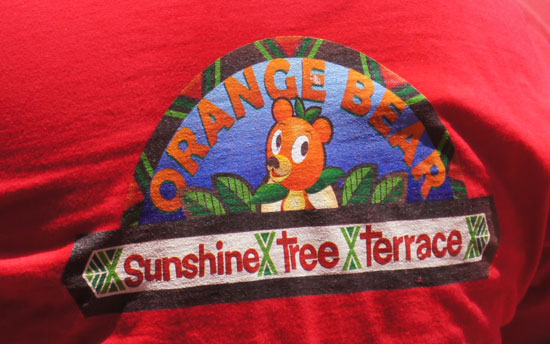 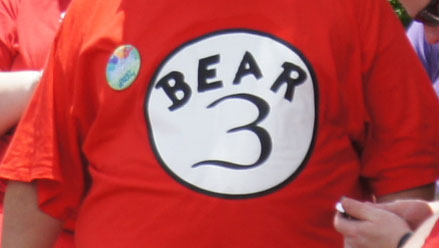 This is parody of the ‘Thing 1’ and ‘Thing 2’ Dr. Seuss shirts sold at Universal Orlando.

Here’s some explanation for those of you who may not know. “Bear” is a beloved self-description of heavy, furry (hairy) gay men. They know they’re heavy and they have a sense of humor about it. 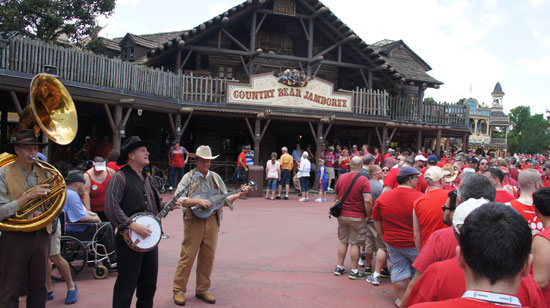 One of the traditions of red shirt day at the Magic Kingdom is that the “Bears” and their friends and family go to see the Country Bear Jamboree show at 1 p.m. 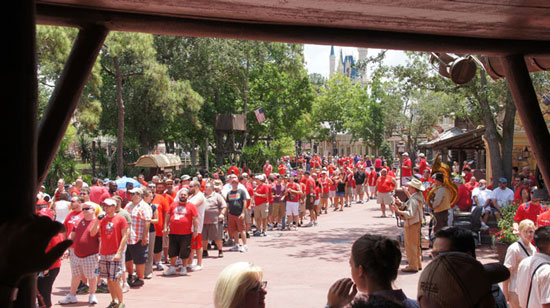 So many guests arrive all at once at the attraction that it takes about three continuous shows to fit everyone in. It’s very entertaining to be in the audience. The guests clap, sing-a-long, and laugh at all of the jokes. Here’s video showing what the comical experience is like: 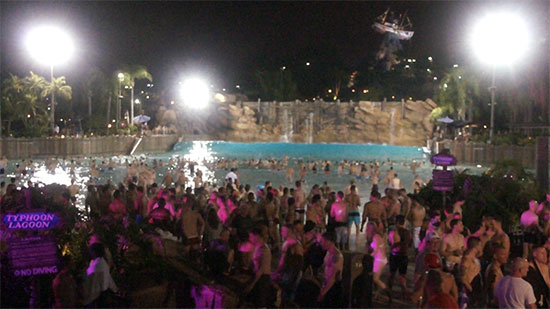 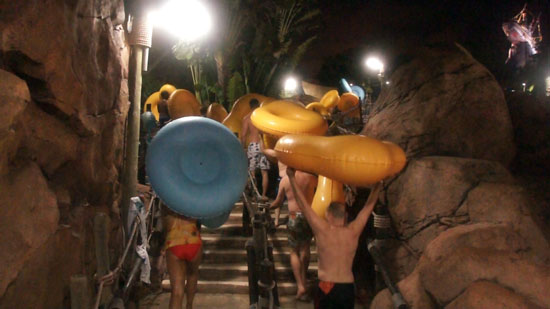 It’s just like a day at the park, except it is a warm night. 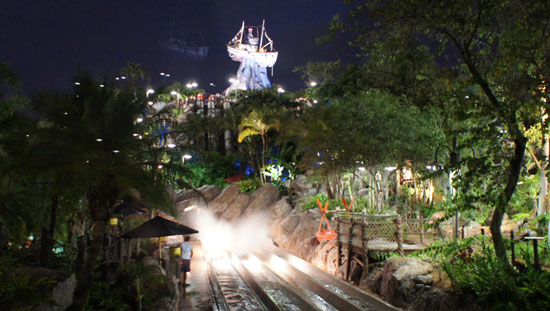 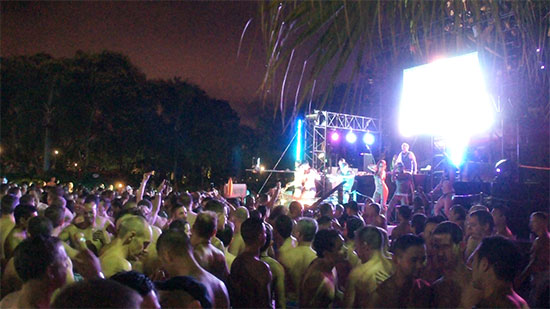 Thousands of guests join in at a dance party at the foot of the wave pool. 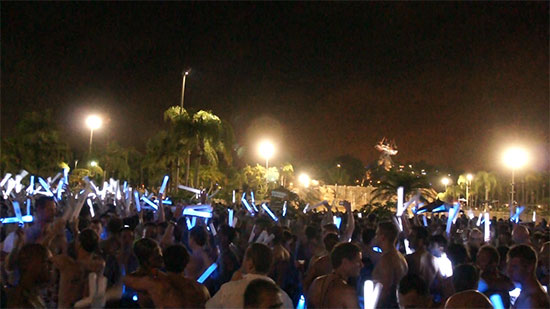 A highlight of the past two years are the glow sticks which are distributed at midnight – A fun souvenir to take home. The party lasted into the wee hours of the morning. We have a video synopsis of the party here: 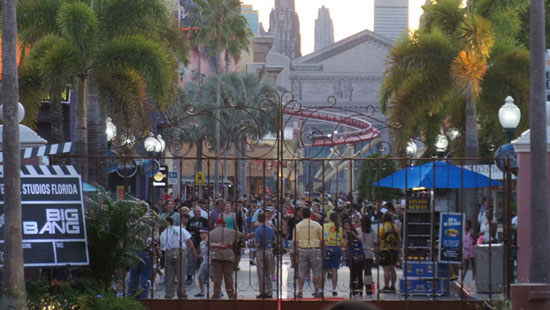 Universal Studios also hosts a large nighttime party. Again, the park was rented out just like it is for a convention group.

This night is actually one of the few times this year where the new Cinematic Spectacular lagoon show is not scheduled to perform. The park closed at 8 p.m. instead of 9 p.m. as on other nights this month. A large sweep was made of the park immediately at 8 p.m. The last day guest exited at about 8:40 p.m., and the Big Bang party began promptly at 9 p.m. 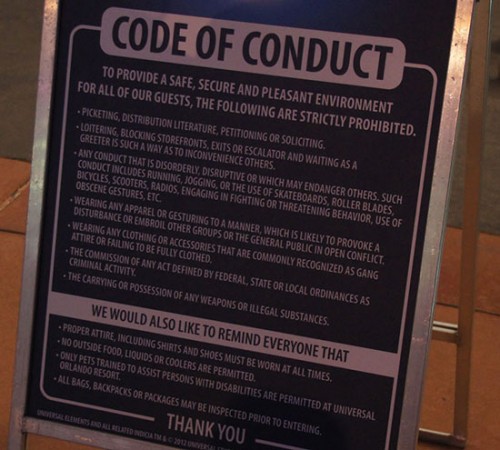 This is a standard sign, but it is interesting reading. It also illustrates that Orlando area attractions welcome everyone, as long as they are well-behaved guests. 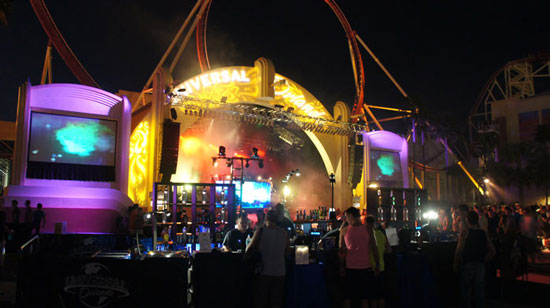 A change in the party this year is that two bars were brought right inside the dance floor area. 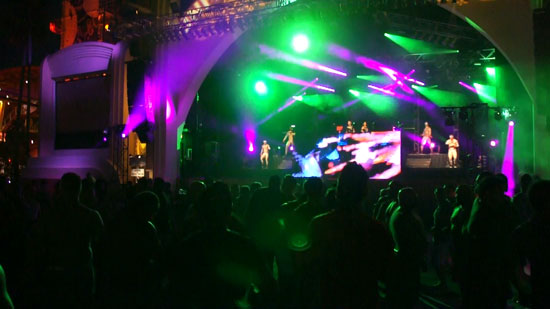 This party has an amazing, constantly-changing light show. This year the opening act also had fireworks. The fireworks are small, but were a surprise to guests and really cool. We have a video of the opening show here, with a short look at the light show too. Apologies for the sound distortion, the party is very loud, follow the timeline guides in the video to easily skip to a different section.

The Attractions Show – Saved by the...