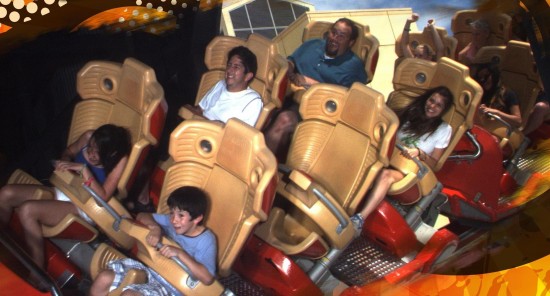 The on-ride video for Hollywood Rip Ride Rockit at Universal Orlando has been given a total creative overhaul, and Orlando Attractions Magazine has your first look at the updated video.

Orlando Attractions Magazine: The Show hosts Banks Lee & JeniLynn Knopp were on hand for the debut and are part of the world premiere of this new on-ride DVD from Colorvision:

Included in the update are the following details:

• Updated cameras deliver high-resolution captures on-board and off
• On-board footage has been extended and expanded with each clip being twice as long as the original video and an additional clip that now captures the end section of the ride
• There is now on-board and off-board coverage for the entire ride with the exception of the break blocks, totaling 1:33 minutes of footage on a 1:45 min ride (88.57% coverage)
• A total creative overhaul has all new themed elements and visual effects including rewind, replay and picture-in-picture clips
• Guests now appear on billboards, on stage and on the side of the ride building TV displays
• Guest names, ride date and album selections have a greater impact and are all included in the ride video’s creative effects along with the ride photo

Even with these new updates, Colorvision is not done adding new material. Upcoming additions include interactive menus, additional featurettes and the ability to view all your on-ride clips back-to-back.

Rip ride rockit video still the biggest con in the park, all that crap video with the music and the notes… Rubbish! Its a real shame where they have the technology to just video every twist and turn to the soundtrack, thats what people are buying it for and they go and clutter it up. Its dissapointing that this overhaul is still bloated for the pricetag when i actually think their photopass across both parks is incredible value for money. Just do an “apple” in this case keep it simple, video the people dont pad it out with rubbish, add a song and we’ll all go home happy!

I couldn’t agree more. What complete rip off!! As I type this, it’s November of 2017 and we were given a standard def crap video “clip” edited in to all of that bogus CGI garbage…what a joke. I was misled into thinking we would see ourselves for the whole ride. We weren’t asking for 4k. HD has been the status quo for a dozen years now. I’m pissed off for being ripped off and being served trash. For anyone who loves the Rip Ride Rockit (and it’s awesome), DO NOT let Universal Orlando rip you off. Don’t be tempted to pay for that trash music video until they decide to get with the times.

This video is way better than the one before where the it was so full of exaggerated effects that you barely could see yourself on the video riding the coaster! This new one still has a loooot of effects but at least you can see more of yourself! In my opinion, still not good enough!

I bought the $40 video in 2019. I didn’t know anything about the scam until it was too late. Imagine my disappointment when I barley saw us but saw plenty of bad animations. We even considered it was broken because no way would universal sell this trash. DO NOT BUY IT. No matter what the ads say or show. Don’t waste your money!