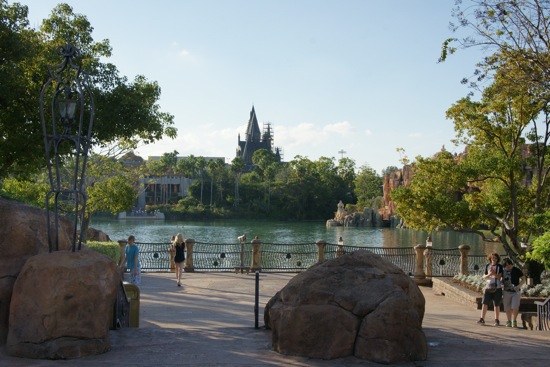 It’s time again for our monthly update on the construction progress of The Wizarding World of Harry Potter at Universal Orlando’s Islands of Adventure. Here’s a quick video tour of what’s new since our last update, followed by some photos:

As you can see in the photo above, some of the scaffolding has come down on the tallest towers of Hogwarts Castle. This makes it really noticeable from all around. It stands out as you drive down I-4 and nearby Turkey Lake Road behind the parks. 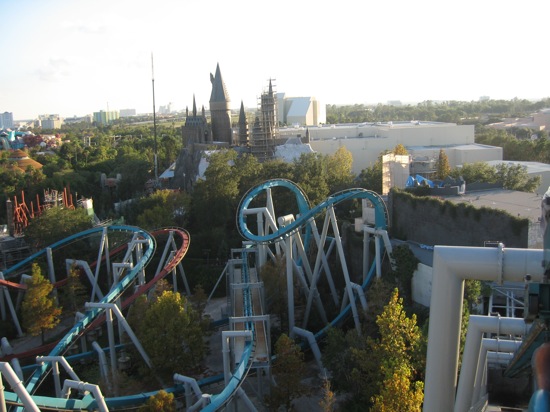 Riding the Dueling Dragons roller coaster (soon to be called Dragon Challenge) offers a bird’s eye view of Hogwarts Castle, though you have to look back over your right shoulder while riding Ice to see it. Notice how large the new building is behind the Hogwarts Castle facade. That building will house the Harry Potter and the Forbidden Journey ride. 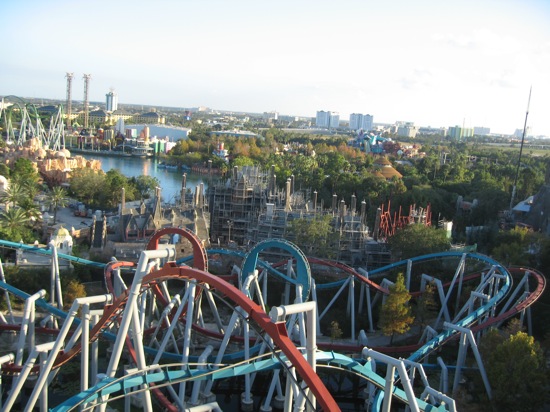 Off to the right of the Dueling Dragons lift hill, you can also see all of Hogsmeade Village, still very much under construction. 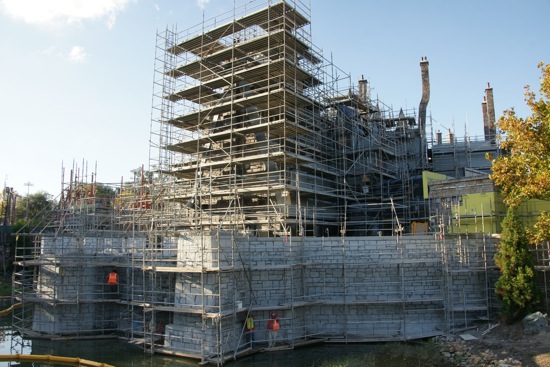 Scaffolding is still up all around The Three Broomsticks restaurant and Hogsmeade Village. 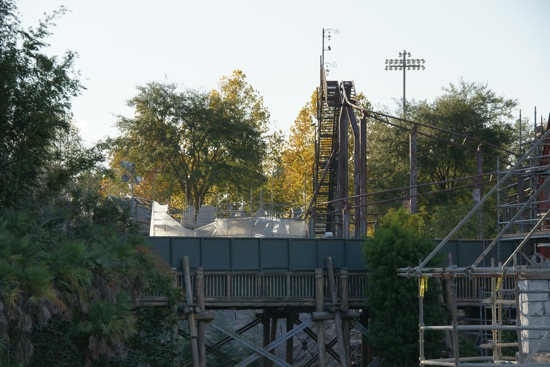 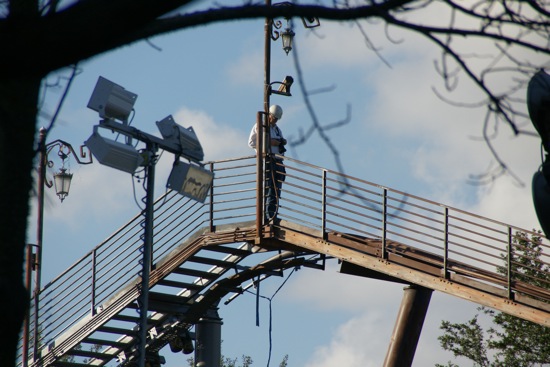 This Universal photographer is getting a great shot from the top of the Hippogriff track. 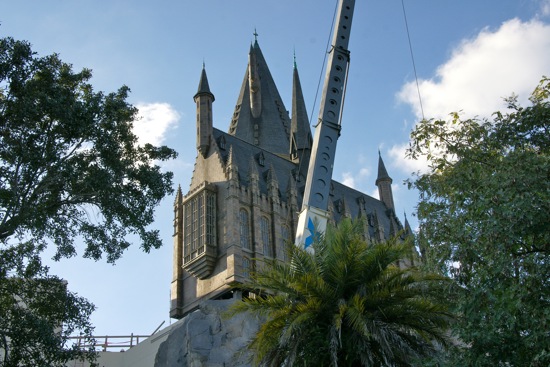 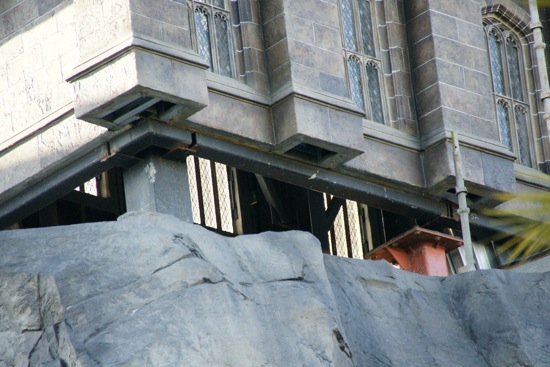 The top of Hogwarts Castle is looking good, but the gap between the castle and the rocks below hasn’t yet been covered. 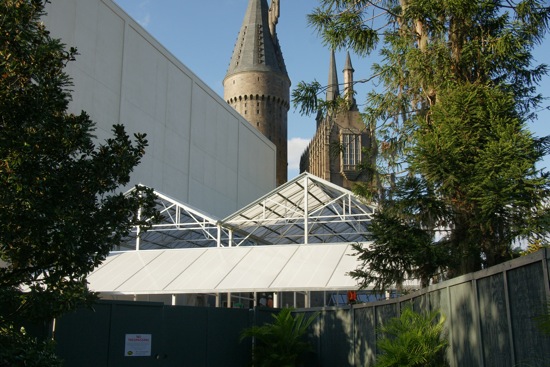 This new tent has been placed along the side of the castle. It seems the queue will run through here. It’s not clear yet if this is just to keep guests out of the sun or if this is supposed to be the greenhouse seen in the movies. Perhaps we’ll get to encounter some screaming mandrakes in person. 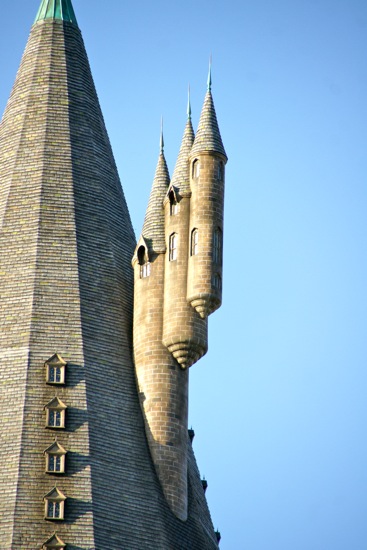 The completed parts of the castle are highly detailed. Here’s a look at the Headmaster’s Tower. 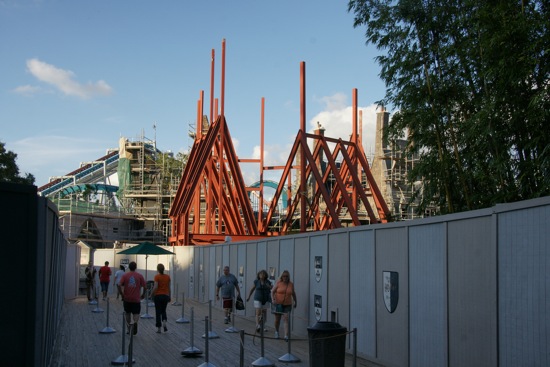 These red girders indicate a building that is being erected later in the construction progress. Or maybe it’s a last minute addition. 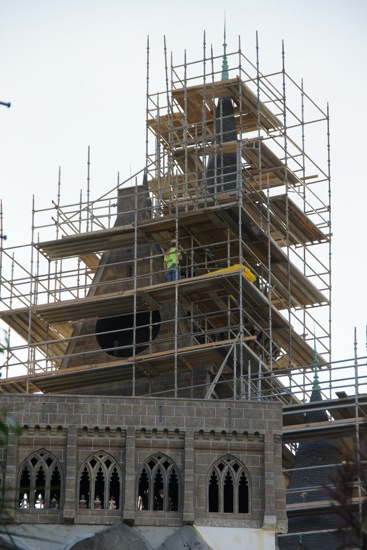 The workers are giving it their all for the spring opening. 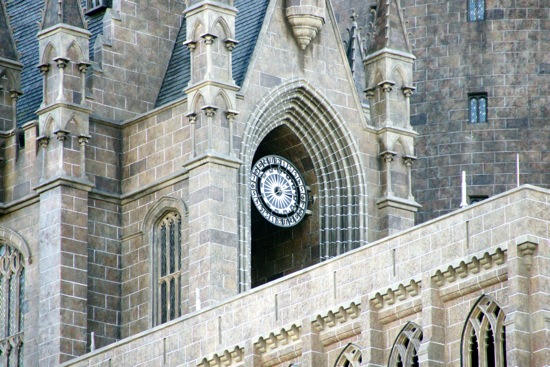 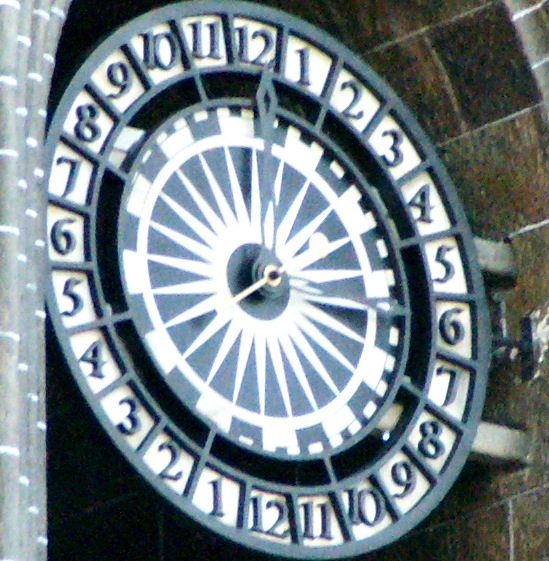 This clock has appeared within a front archway on Hogwarts Castle and seems to point to 6 p.m., but it’s not exactly an ordinary clock. Will this be a real running clock? 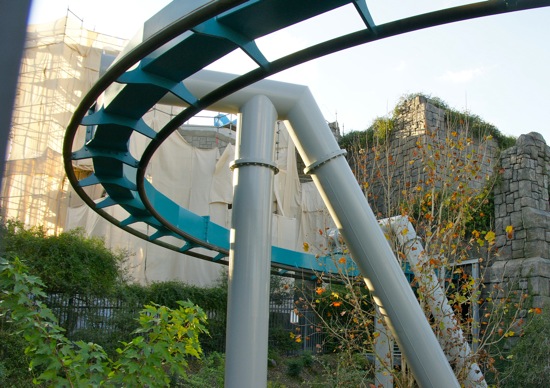 Tarps are up around the entrance to Dueling Dragons for its transformation into Dragon Challenge. The ride is still open, but guests now enter through the exit. 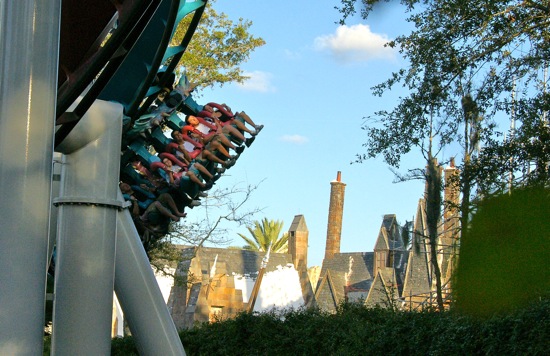 This view shows just how close the Dragon Challenge ride will be to Hogsmeade Village. 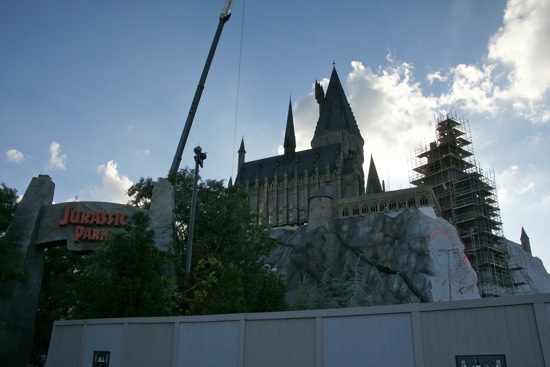 The Jurassic Park entrance sign is currently quite visible next to Hogwarts Castle, so I hope they do something to hide it as it really doesn’t fit in. It seems like a solid row of trees could easily block the view of the Jurassic archway from pathway leading up to the castle.

The Wizarding World of Harry Potter is still scheduled to open in Spring 2010. Some rumors point to a possible May opening but those are unfounded at this point.

For more from the Wizarding World of Harry Potter, pick up a copy of our Winter 2010 issue. Here’s a preview:

On another site they got a look over the construction fence and you can see that the suspicious new white canopy is going to be a quee line, theres ramps and such in the price of being finished off on the themeing

Nice pics, but it’s a shame that you lowered yourself to breaking park rules by sneaking a camera on a ride that doesn’t permit loose objects