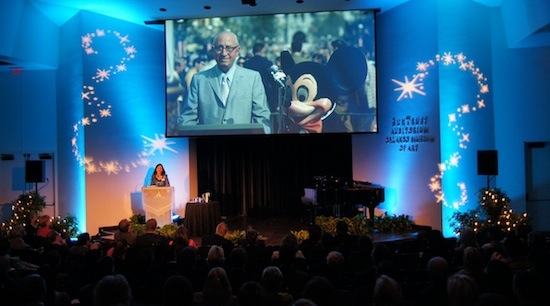 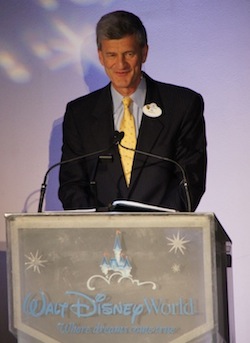 Weiss discussed some of the details of a new study commissioned by Disney that shows their strong economic impact, not only in Central Florida but across the state.

The $18.2 billion in annual economic activity generated locally by Walt Disney Parks and Resorts accounts for 2.5 percent of the gross domestic product for the entire state. Of the 7.2 million Floridians in the workforce in 2009, more than one out of every 50 had a job that can be directly or indirectly tied to the operations of Walt Disney Parks and Resorts. Locally, six percent of all jobs in Central Florida can be attributed to Disney’s operations.

“As our business at Walt Disney Parks and Resorts keeps growing, the bottom line impact for Florida is the more than 160,000 jobs and $6 billion in compensation directly and indirectly associated with these jobs that help power our state’s economic engine,” said Weiss. “The ripple effect created by our operations resonates throughout Florida as families across the state use their earnings to purchase goods and services from the diverse businesses both large and small that make Florida such an amazing place to live, work and play.”

The impact of Disney’s operations in Central Florida and across the state includes:

Compensation – In Central Florida, cast members at Walt Disney Parks and Resorts earned a total of nearly $1.8 billion during FY2009. Across Florida, when direct and indirect jobs are taken into account, more than $6 billion in paychecks can be attributed directly or indirectly to Disney’s operations.

Purchasing – Each year Walt Disney Parks and Resorts purchases more than $2 billion worth of goods and services. Nearly $1 billion is paid to vendors with a presence in the state and approximately $500 million goes to vendors in Central Florida. 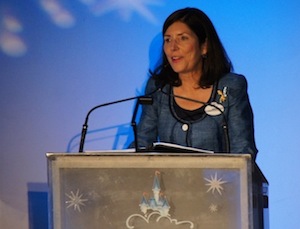 Crofton spoke about Disney’s local impact as it pertains to the community. She announced that in honor of its 40th anniversary, Walt Disney World is kicking off a 40-day “Shine On” celebration across Central Florida to surprise, recognize and reward nonprofit groups, school districts and organizations that improve the lives of local children.

Between now and May 22, Disney will give more than $1.2 million in Disney Helping Kids Shine Grants throughout Orange, Osceola, Seminole, Lake and Polk counties. Additionally, prize patrols will recognize 15 students in the five-county area as Disney Dreamers and Doers Shining Stars for their outstanding character.

“Walt Disney World Resort supports programs that make a long-term positive impact on children in our community,” said Crofton. “We are excited to begin this 40-day season of giving, during which we will distribute $1.2 million to local organizations that share our commitment to Central Florida’s children.”

“From the earliest steps toward kindergarten to high school graduation, our schools and our teachers have a profound effect on the leaders of tomorrow,” said Crofton, as she addressed the audience of community leaders and recognized Central Florida educators. “Great schools provide children the spark they need to go on to do great things. Disney applauds our local public schools for all the work they do to prepare our community’s children for the future.”

Crofton also gave some details from their 2010 Community Report.

In 2010, Disney World focused on improving the lives of children through $28 million in cash and in-kind support, 228,000 hours from Disney VoluntEARS and collaboration with community leaders.

Examples of Disney’s charitable giving in Central Florida include:

Providing support – The 2010 Disney Helping Kids Shine Grants awarded $1.2 million to fund programs through 57 charities. Top Disney grant recipients include Boys & Girls Clubs of Central Florida, Big Brothers Big Sisters of Central Florida and A Gift For Music, of which Disney is proud to be a founding sponsor.

The presentation ended with a live performance of the music from Disney’s The Magic, The Memories and You castle projection show and a visit by Disney characters.

For video from the presentation, watch episode 21 of Orlando Attractions Magazine – The Show. 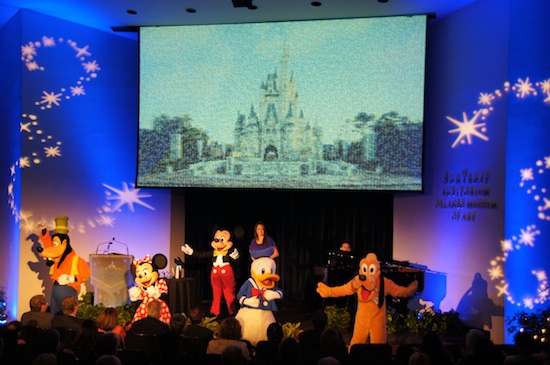 From 'Pirates of the Caribbean: On Stranger Tides', Angelica arrives at the Magic Kingdom

Disney Dining Promo Card unveiled for up to...

Tips for getting engaged at Walt Disney World Resort

I NEED TO KNOW THE AUTHOR OF THIS ATRICLE FOR MY SOCIAL STUDIES PROJECT, HELLOOOO,WHAT YOU LOOKIN’ AT,HUH?

Dear People,
My daughter is having a tough time writing and outline about Walt Disney…you didn’t make it any easer to explain. I told her to go online to look for examples and heres what she sees a whole bunch of nothing…wheres the outline that she searched for? My daughter got a really bad grade because you showed her a freaking 3 page essay on something she didn’t want so watch what you put online …

I found this article extremely helpful when writing my paper for National History Fair. Thanks so much for posting!

Found this very helpful for my Speech on Disney’s affect on Orlando and central florida!