From 'Pirates of the Caribbean: On Stranger Tides', Angelica arrives at the Magic Kingdom 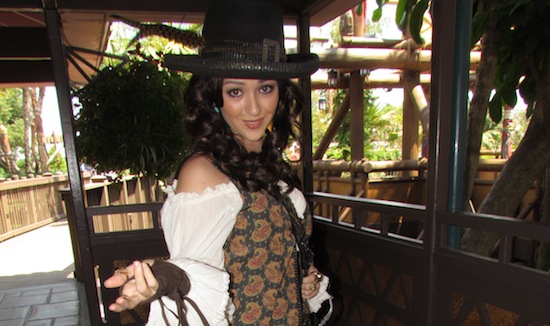 Penelope Cruz may play Angelica in the new Pirates of the Caribbean movie, On Stranger Tides, but the real Angelica is now meeting guests daily at the Magic Kingdom. We were able to speak with her today and bring you this video.

Angelica, daughter of the legendary pirate Capt. Blackbeard, is fresh from her pursuit of the Fountain of Youth and is currently meeting guests near the Adventureland bridge. Her official debut will be on Friday when she moves to a spot just outside the Pirates of the Caribbean ride, next to Pirate’s League.

Angelica is a world-famous pirate with a reputation for skill and cunning – rivaled only by her former flame, Capt. Jack Sparrow. She knows he’s been spotted at the Magic Kingdom and she’s on the lookout for him.