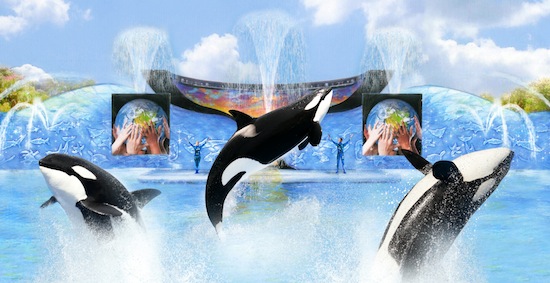 SeaWorld will debut a brand new killer whale show in about three months. “One Ocean” will feature many “Shamu’s” performing together with a newly designed backdrop of bright colors and fountains. 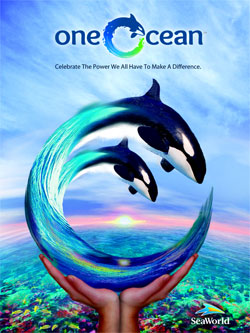 The show will feature spectacular whale behaviors, including high leaps and multiple whales performing simultaneously. The whales will interact in new ways with trainers, the audience, each other, and even the set itself. In one segment, the whales will play amid giant fountains.

Shamu Stadium – with its three-story set, panoramic screens and hundreds of surround-sound speakers – will feature special effects that envelop guests, including colored lights; fountains; underwater imagery and an original, contemporary musical score with global rhythms. The message of caring and respect for the world we share will be woven throughout the show – encouraging guests to make a difference through their own everyday actions.

The current show, “Believe”, has been playing at the SeaWorld parks for the past five years. It was changed significantly last year after a trainer lost her life during an encounter with one of the killer whales backstage. Since then, trainers haven’t been allowed in the water with the whales. This safety measure will continue with the new show.

“This new show brings to life SeaWorld’s mission in the most powerful way yet,” said Jim Atchison, president and chief executive officer of SeaWorld Parks & Entertainment. “This show is what guests love about our parks – thrilling entertainment that educates and inspires you to celebrate, connect and care for the world we share.”

Believe is expected to continue daily at the park up until the new show makes its premier in late April. One World will also premiere at SeaWorld San Diego on Memorial Day weekend and SeaWorld San Antonio in June.

For updates, information and photos as the shows are developed,
visit SeaWorld.com/OneOcean.