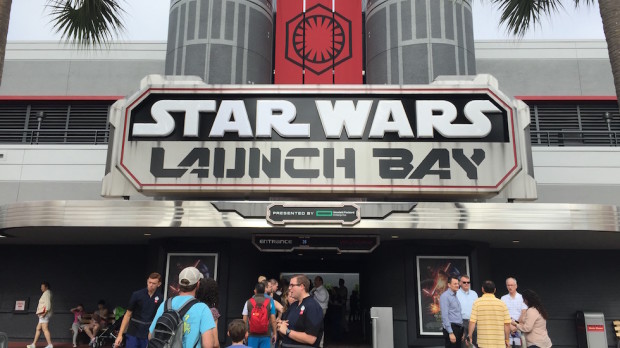 The Force is strong with Disney’s Hollywood Studios as new Star Wars experiences have debuted at the park today.

Just ahead of the Dec. 18 movie premiere of “Star Wars: The Force Awakens”, these new offerings involve the Star Wars Launch Bay, a central locale for fans to celebrate all things Star Wars; Star Wars: Path of the Jedi, a cinematic overview of the Star Wars saga; and enhancements for Star Tours – The Adventures Continue (read about that here) and Jedi Training: Trials of the Temple.

Located in Animation Courtyard, Star Wars Launch Bay is a primary location within the park for fans to celebrate all things Star Wars. In this multi-sensory space with an outdoor queue area lined with special concept artwork, guests can interact with Star Wars characters, tour galleries featuring treasured memorabilia and replicas of large-scale Star Wars artifacts, including ones from “Star Wars: The Force Awakens”, and play the latest Star Wars interactive video games, plus have access to special Star Wars merchandise.

Star Wars: Path of The Jedi 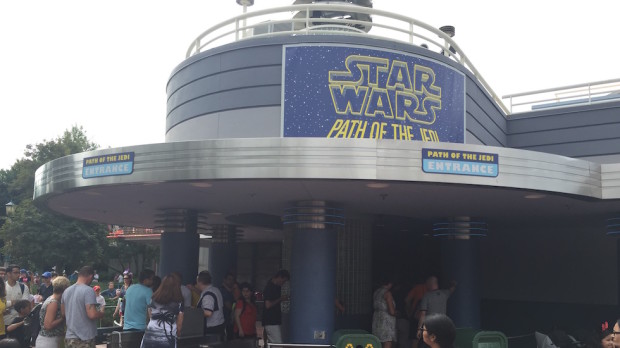 Guests looking to relive the stories from the Star Wars saga or be introduced to the iconic characters, including ones from Star Wars: The Force Awakens, can watch an abridged, cinematic reel celebrating the Star Wars saga (episodes I-VII) in the ABC Sound Studio theater.

Jedi Training: Trials of the Temple

This popular entertainment offering has been reimagined with new characters and a new villain to battle from Star Wars Rebels. Younglings are guided to the site of a secret and ancient Jedi temple where they will face villains such as Darth Vader and the Seventh Sister Inquisitor from the popular Disney XD series Star Wars Rebels, and discover if they have the makings of a true Jedi.

As guests enjoy the sights and attractions of Disney’s Hollywood Studios, they may come face to face with First Order Stormtroopers who will patrol various areas of the park, interacting with guests during their mission to find members of the Resistance.

Park guests can also purchase Star Wars themed foods and food and beverage containers around the park, particularly at the Backlot Express restaurant near Star Tours.

Additional Star Wars elements enter the galaxy at Disney’s Hollywood Studios starting in 2016, including a fireworks show called “Symphony in the Stars: A Galactic Spectacular,’’ plus a Star Wars-themed dessert party.

Look for full coverage of Star Wars at Walt Disney World in the upcoming Winter issue of “Orlando Attractions Magazine”.

Video of Magic Kingdom's Concert in the...