A limited number of guests each day will be able to enter and explore the Vehicle Assembly Building (VAB), inside the Kennedy Space Center starting on Nov. 1. 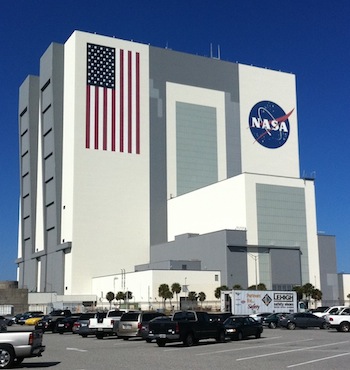 The 525-foot tall building is where Apollo V rockets and even space shuttles were assembled for launch. For the past 30 years the building has been occupied by select astronauts, NASA officials and space center personnel. The building is now open to a limited amount of people each day for a special two-hour tour.

Guests on the Kennedy Space Center Up-Close tour may see a space shuttle orbiter inside the VAB as they are being prepared for display in their new homes in Los Angeles, Calif., Washington, D.C. and the Kennedy Space Center Visitor Center. Guests will also be able to walk along the edge of the Transfer Aisle, which is kept open to move behemoth elements of rockets among the four High Bays within the building. Tour communicators will provide a brief overview of the VAB and the work done there.

Plenty of colorful signage depicts the engineering feats that have taken place behind the 456-foot-tall high bay doors, such as the work of the VAB’s two 325-ton bridge cranes that were used to lift the shuttle orbiters and mate them to their external tank and solid rocket boosters with pinpoint accuracy. Signage also shows prospective operations that will take place within the VAB for NASA’s newest space exploration program, Space Launch System, or SLS. Banners signed by thousands of KSC workers showing support for each of the space shuttle missions proudly remain on display throughout the VAB.

The VAB tour stop is just one part of the two-hour guided Kennedy Space Center Up-Close tour. During the first portion of the tour, guests will have the opportunity to view Kennedy Space Center landmarks including NASA’s Kennedy Space Center Headquarters, office of Center Director and four-time shuttle astronaut, Robert Cabana, and various KSC staff; and the Operations & Checkout building (O&C), which serves as the astronaut crew quarters prior to each launch and where science modules and trusses for the International Space Station (ISS) were tested before flight. This is also the site at which astronauts boarded the Astrovan to ride to the launch pads. The tour also passes by the Space Station Processing Facilities (SSPF), where hardware and components of the ISS were processed and tested before flight.

Next, guests may disembark at the NASA Causeway for a panoramic view of the Banana River, Port Canaveral and Cape Canaveral Air Force Station, home of the first rocket launches of the Mercury and Gemini programs. Guests will be able to spot launch pads 17, 37, 40, and 41, which are still used today for commercial and government launches. They may even spot a rocket on the pad or inside its mobile service structure. From this scenic vantage point, guests may also see Liberty Star and Freedom Star, the two recovery ships used to retrieve the space shuttle’s solid rocket boosters from the Atlantic Ocean after they were jettisoned during launch.

The tour then travels into the heart of Kennedy Space Center, where guests will pass by the three Orbiter Processing Facilities (OPFs), the hangars where shuttle orbiters were processed and maintained between flights. Today, the OPFs are being used to decommission the orbiters in preparation for their retirement, including Atlantis, which will be displayed in a new facility at Kennedy Space Center Visitor Complex in 2013.

Following a stop inside the VAB, guests will re-board their bus for views of the Crawler Transporters and “Crawlerway,” the equivalent of an eight-lane highway lined with river rock and designed to support the crushing weight of the Saturn V and space shuttles along with their mobile launch platforms. They’ll also get a view of the Solid Rocket Booster Storage Areas; the Pegasus barge used to haul the shuttle’s orange External Fuel Tanks from their birthplace in Louisiana; Press Site and the famous blue countdown clock; as well as the Mate/Demate Device at the Shuttle Landing Facility (SLF), where orbiters were unloaded from Boeing 747s after an occasional cross-country piggyback ride. 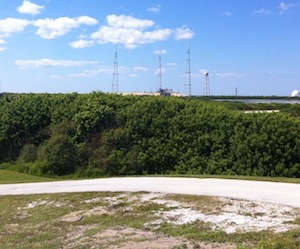 Guests will disembark a final time at Camera Stop A/B – one of the hilltop sites from which NASA remotely shoots launch photography and videography. Tour guides will point out the modifications to launch pad 39B, which has been stripped of all vertical structure to make way for the launch of a variety of rockets, commercial or Space Launch System (SLS). Launch Pad 39A remains unmodified, so guests can see where every manned mission to the moon and many of the space shuttle missions originated.

‘Summer of Mars’ kicks off at Kennedy...