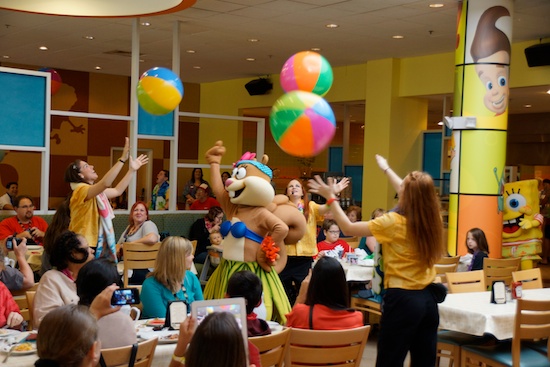 The Nickelodeon Suites Resort was the site of the world premier of a brand new Spongebob Squarepants 4D movie last week, a great addition to the new Bikini Bottom character breakfast which recently debuted as well. 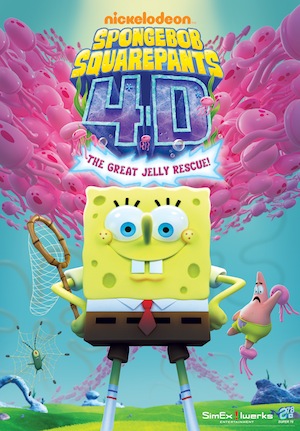 The seven-minute experience incorporates in-theater and in-seat effects including bubbles and scents as well as a few special surprises. The attraction delivers three different endings, each featuring their own unique effects. These are randomly played, allowing guests the opportunity to enjoy a slightly different experience each time they visit.

The attraction joins SpongeBob with his friends in tow on a rollicking adventure when the villainous Plankton abducts all the Jellyfish with his pollution-belching contraption. It’s up to SpongeBob SquarePants to save the day, free the Jellyfish and destroy Plankton’s machine.

“SpongeBob fans will love this hilarious encounter that brings them face to face with swarms of Jellies, giant ghostly pirate ships and Plankton’s biggest threat to the Krusty Krab – a massive electric cannon,” said Brent Young, director and producer. The experience will blow the guests away. It’s 3D at its best!”

“This unique 4-D experience shares a conservation message using a charming storyline,” said Mark Cornell, senior vice president, SimEx-Iwerks Attractions Development. “Further, we have created pre-show elements that highlight the conservation message in the 4D experience, all brought to life by linking these popular characters to their ocean counterparts.”

“The Nick Hotel is proud to be home to SpongeBob SquarePants and to be the location for the world premiere of his latest production,” said Louis Robbins, managing director, Nickelodeon Suites Resort. “Our guests, young and old, adore SpongeBob and we are thrilled to debut this film for them to enjoy during their stay.”

The 4-D experience will also premiere at SeaLife in Birmingham, UK, Parque De Atracciones Madrid, the South Carolina Aquarium (May 20), Mystic Aquarium (May 26), and the Circus Circus Hotel in Las Vegas.

Also new to the resort is SpongeBob’s Bikini Bottom Breakfast. Hula your way to the breakfast buffet and hang out with SpongeBob SquarePants and some of your other favorite deep-sea dwellers. It’s high tide at the Nicktoons Cafe. In addition to greeting guests at their table, the characters perform many mini shows throughout the morning. Here’s a short look at one of them:

Both the 4D movie and breakfast are an added cost and are available to hotel guests only. Watch the April 25 episode of Orlando Attractions Magazine – The Show for our report from Nick Hotel.

Photo Finds: Tour of props for A Pirate’s Adventure – Treasure of the Seven Seas – April 22, 2013