Nick Hotel reaches their goal of sliming 100,000 guests this summer 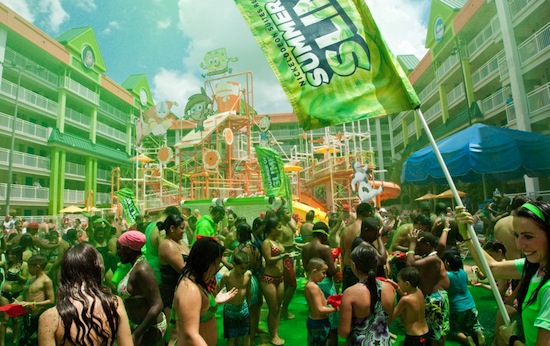 Nickelodeon Suites Resort recently celebrated the hotel’s 100,000th sliming. The slime ticker has been tracking guest slimings on property for three months as part of the hotel’s Summer of Slime.

While guests have always been able to get slimed at Nick Hotel, the Slime Squad invaded the hotel at the start of summer and took the experience to the next level. The poolside 100,000th sliming included a mass sliming where guests were doused in slime by local firefighters and their fire hoses. A donation of $3,000 will be presented to the National Fallen Fire Fighters Association as part of the hotel’s efforts to honor these heroes this summer.

“The Summer of Slime has been a huge hit with our guests, kids and adults alike,” said Jim Struna, director of marketing and revenue management for Nickelodeon Suites Resort. “We are always creating new and exciting experiences for our guests. We want every guest who stays at the Nickelodeon Suites Resort to have the slime of their lives and this summer we have certainly achieved that.”

For a look at the Summer of Slime, here’s Episode 33 of Orlando Attractions Magazine – The Show, shot on location at Nick Hotel.

Out of the Loop: Legoland California to add a Legoland Hotel

Review: Is the Star Wars Galactic Starcruiser worth...