Out of the Loop: Legoland California to add a Legoland Hotel 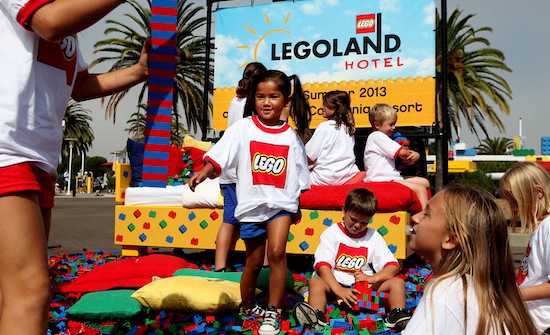 Carlsbad, Calif. – With the doors of Legoland Florida not yet opened for business, its West Coast counterpart, Legoland California, has announced major expansion plans.

Perhaps the theme of recent years at Legoland California would be “Here we grow again!” Going back to 2008, Sea Life Aquarium opened. This attraction includes over 4,000 sea creatures, a 200,000-gallon ocean display and a 35-foot long ocean tunnel. In 2010, the Legoland Water Park opened. The water park includes many of the expected water attractions, but with a Lego twist. For example, there is the “Build-a-Raft River”. Here guests can customize their own raft using soft Lego bricks before floating down the lazy river. This park represents the first and only Legoland Water Park in the world. This year, the theme park debuted Star Wars Miniland. Seven scenes from the movies and The Clone Wars television series are depicted in an interactive Lego model display.

To literally build upon this massive growth, yesterday Legoland announced the planned opening of a Legoland Hotel in the summer of 2013. It was just in July when Legoland officials announced in Legoland Deutschland (Germany) that Legoland Parks would be transforming to Legoland Resorts. The 250-room hotel will be Lego themed with brightly colored Lego décor and interactive elements geared toward their often discussed target demographic of families with children ages 2 to 12. It will also feature a pool area and restaurant. Construction is set to begin in October.

The three-story hotel will be located just to the right of the main entrance to the park, an area currently used for bus parking. While this is the first Legoland Hotel in North America, it will be the third completed, joining Legoland Hotel Billund (Denmark) constructed in 1991 and Legoland Hotel Windsor (United Kingdom) to be completed in 2012. It will also be the third hotel on resort property joining the Sheraton Carlsbad Resort and Spa and the Grand Pacific Palisades.

Nick Hotel reaches their goal of sliming 100,000 guests this summer