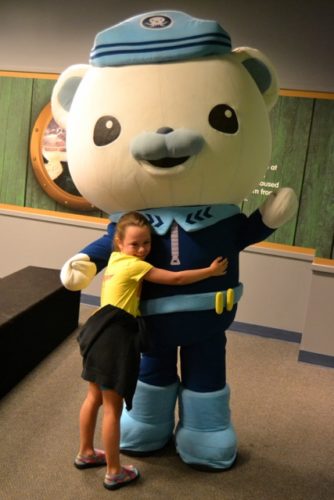 Disney Jr.’s Octonauts are visiting the Sea Life Orlando aquarium on weekends, now through the end of October.

Young fans of The Octonauts, a popular animated children’s television show on Disney Jr., can meet Captain Barnacles and Kwazii at SEA LIFE Orlando Aquarium on Fridays through Sundays, beginning September 16 through October 30.

During the Octonaut characters’ visit to the I-Drive 360 attraction, young guests can take photos with the characters at scheduled onsite meet-and-greet events and become part of the Octonauts crew by participating in the Octonauts Training Academy at the aquarium.

The Octonauts are a team of undersea adventure heroes who rescue and protect sea creatures in trouble. During each television episode, viewers are able to learn about a variety of marine life as The Octonauts study facts about sea animals and their ocean habitats. Captain Barnacles, a brave polar bear, is the leader of The Octonauts crew while Kwazii, a kitten, is the crew’s lieutenant and a daring explorer. Both characters will make appearances at the Orlando aquarium.

“SEA LIFE is excited to have The Octonauts visit us for the first time with interactive, educational and fun activities,” said James Paulding, General Manager at SEA LIFE Orlando. “Children will have the opportunity to meet the characters and learn while having fun on their adventure to complete the Octonauts Training Academy.”