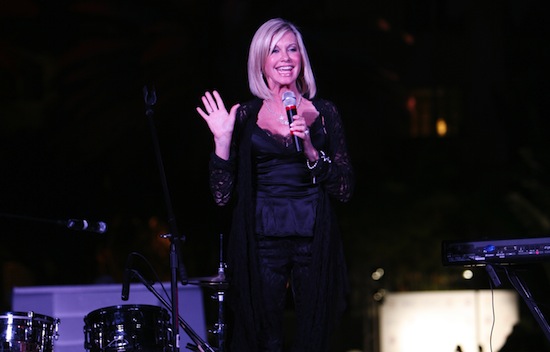 Olivia Newton-John will be at Busch Gardens as she hosts her second Pink and Blue for Two (PB42) cancer awareness event. The ticketed event will be held from 8 to 11 p.m. on Oct. 27 in the Desert Grill.

Olivia hosted the inaugural event in Miami last April, which launched a unique campaign dedicated to raising awareness of breast and prostate cancer, and urging couples to remind one another to go to their doctors for screenings.

Olivia is an 18-year breast cancer survivor. She performed for the crowd at the inaugural PB42 in Miami and was also joined on stage by Jon Secada for a surprise performance of You’re the One that I Want from the movie Grease.

Olivia’s nephew and founder of PB42, Emerson Newton-John, said hosting alongside his aunt will be her friend and founder of Moffitt Cancer Center, H. Lee Moffitt. As speaker of the Florida House of Representatives, Moffitt pushed through legislation that created the cancer center, which opened its doors in 1986.

“I am so excited to return to support PB42 in Tampa and to co-host the evening with my friend and mentor, Lee Moffitt,” said Olivia. “The evening will not only be filled with music and laughter, but will also help create awareness of the striking similarities between prostate and breast cancers.”

Olivia will not only host the event, but will also perform many of her hit songs. Also making his first appearance for PB42 will be Tampa native Eric Darius, a Billboard-charting contemporary jazz artist.

A portion of event proceeds will go to the Moffitt Cancer Center and the Olivia Newton-John Cancer and Wellness Centre, which is to be built in Melbourne, Australia.

Tickets are $150 per person and must be purchased in advance. They are available through Oct. 20 at pb42.com.