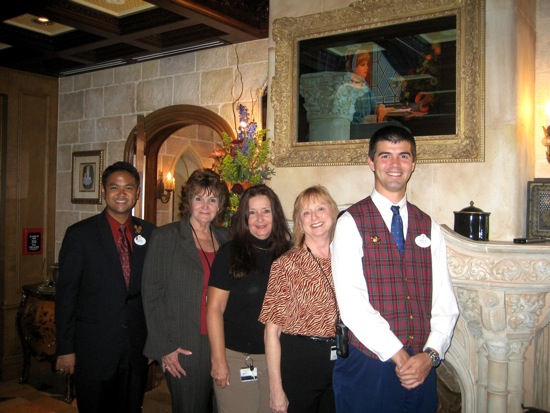 Charlene, Jean and Suzan worked in what is now the suite the night Magic Kingdom Park opened, at a time when there was velvet wallpaper rather than luxurious décor. Revisiting their former workplace was especially meaningful, as the cast members have not seen the room since 1973.

“I felt like crying when I glanced around the room,” Charlene said. “It is amazing to think back on all the wonderful times we shared and to see the difference from then to now.”

Not only were the ladies captivated by the transformation of the suite, they also were thrilled to reunite to participate in this special experience.

“It has been years since we have seen each other, and having the opportunity to do this together as a group made it even more incredible,” said Suzan.

Walt Disney World Guest Relations provided this exclusive tour for Charlene, Jean and Suzan, to explain the lavish treatment suite guests receive as part of “The Year of a Million Dreams” celebration and to ensure their visit was magical.

Former Walt Disney World Ambassador Lowell Doringo also accompanied the ladies on their tour. “I am honored to be here, as these cast members are the original princesses of the castle,” he said.

Charlene, Jean and Suzan agreed this was a day they would cherish forever. “It was so beautiful seeing it in person,” Jean said. “That was the most memorable experience I have ever had – it was a dream come true!”

Try before you buy.

Kevin from Disney/Pixar’s ‘UP’ meet-and-greet coming to...