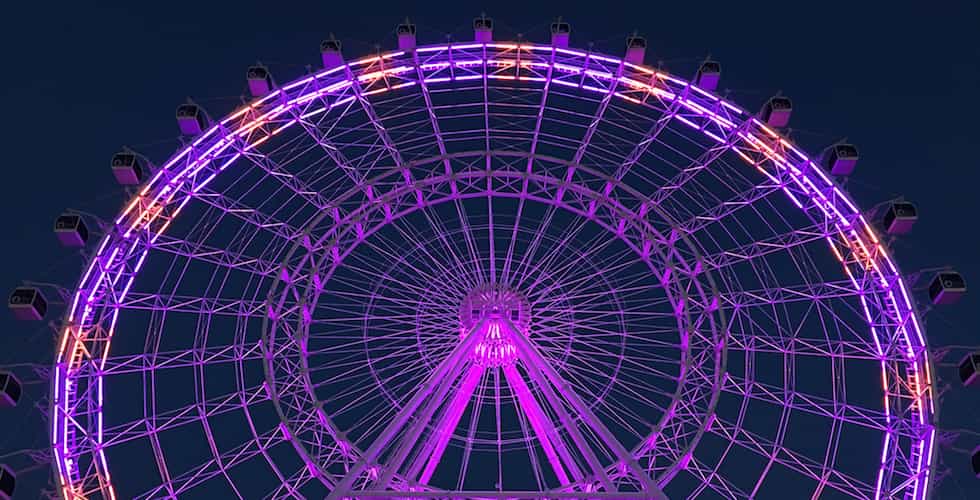 The Coca-Cola Orlando Eye will transform into a giant spiderweb complete with a 60-foot spider for the Halloween season.

This October, the Coca-Cola Orlando Eye will become the home of the spookiest sight in all of Central Florida, as it transforms into a 400-foot-tall spider web, covered in giant creepy-crawlies.

The Eye will also host an all-new light and music show, have its own themed Snapchat filter and more during its “Spooky Nights and Spider Frights” event, which runs through Saturday, Nov. 4, 2017.

When the Coca-Cola Orlando Eye becomes a giant spiderweb, it will become the home of a giant 60-foot spider and 10 of its eight-legged freaky friends as they take over the Eye’s main building.

From the I-Drive 360 courtyard, visitors can see 64,000 LED lights take over the observational wheel for a 10-minute show synchronized to a Halloween soundtrack. The show will take place at 8 p.m. Sunday through Thursday, and at 8 and 10 p.m. Friday through Saturday.

Four of the capsules on the wheel will be Halloween-themed, and give riders the chance to experience the views of Orlando while being surrounded by pumpkins, spiders, ghosts and other fall decorations.

“Orlando is fast becoming the world’s Halloween Vacation Capital and we are thrilled to bring out guests a spellbinding program of spooky family fun and the ultimate spider-selfie!” said Jacob Kristensen, General Manager of the Coca-Cola Orlando Eye.

Visit Orlando collaborated with the Coca-Cola Orlando Eye to create the ultimate Halloween photo opportunity for guests, including a themed Snapchat filter to customize their spider selfie. The photo opportunity will be available to guests now through Nov. 4, and is free for guests visiting the I-Drive 360 complex.

I-Drive 360 has announced a five-day finale to close out the Halloween season. From Friday, Oct. 27 through Tuesday, Oct. 31, guests at the Orlando Eye courtyard can enjoy:

The latest on the early-morning crash between...