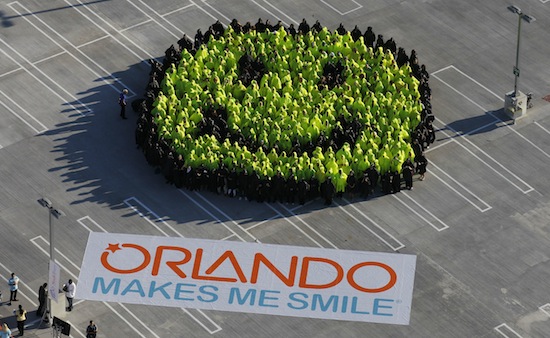 Smiles are usually huge when guests come to Orlando, but this one takes the cake. Five hundred smiling people from around the world gathered Oct. 1 at the new Amway Center to set the Guinness World Record for the biggest smiley face. Coinciding with the official World Smile Day, they formed the smiley face and stood shoulder to shoulder for 10 minutes on the top parking deck. 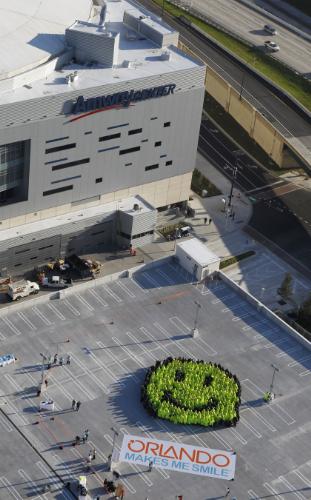 At 50 feet in diameter, the world’s largest smiley face was nearly the size of a basketball court. Amongst the participants dressed in yellow and black ponchos, were travelers from across the United States, the United Kingdom, Canada, Germany and Brazil.

True to the saying, “Smile and the whole world smiles with you,” the Orlando Convention & Visitors Bureau (Orlando CVB) spent half a year searching the globe for people who had special smile stories to share as part of their World Smile Search campaign. More than 20,000 smile stories from 77 countries have been collected at VisitOrlando.com/smile and the people behind some of those stories were flown in for the world record event.

“With our world-famous theme parks and more than 100 attractions, we thought we might just be the smile capital of the world. Now, it’s official,” explained Gary Sain, president and CEO of the Orlando CVB. “We have a world record and world travelers from the four corners of the globe told us that no other destination creates unique smile moments and memories like Orlando for families and friends to share for a lifetime.”

During the campaign, the Orlando CVB also raised $19,825 for the charitable organization, Smile Train. The donations will be used to provide more than 70 cleft lip or cleft palate surgeries for children so that they can smile. Some of the children who have benefitted from Smile Train’s work joined the smile ambassadors from all over the world at the record-breaking event.

Here’s a video from the event by the Orlando CVB Smile ambassadors:

Winning couple to ‘tie the noose’ during Halloween Horror Nights

This is so awesome! I just recently found out about Smile Train and I love seeing other people expressing their dedication to this non-profit organization. Check out this site <a href=https://www.facebook.com/SmileTrain smile train and help the children raise money for their cleft palette surgeries!

What a great smile! Help give children something to smile about! <a href= https://hubpages.com/hub/The-Smile-Train-Helping-Children-With-Cleft-Lips smile train

Festival of Nations kicks off March 16...