Orlando thanks its visitors in a big way for making the City Beautiful the no. 1 destination in the US 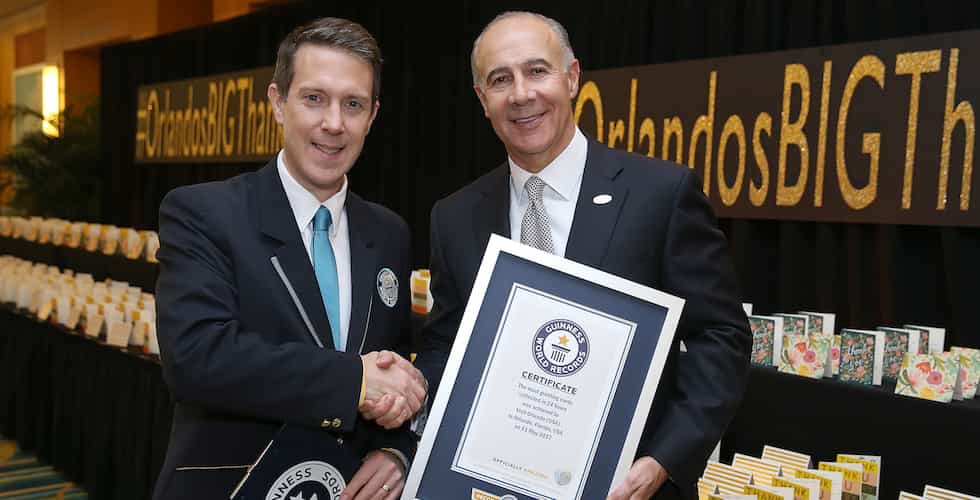 Visit Orlando set a Guinness World Record for the most thank you cards collected within a 24-hour period at their Celebrating Travel & Tourism Luncheon on Thursday.

At the Celebrating Travel & Tourism luncheon hosted by Visit Orlando on Thursday, May 11, the City Beautiful took to appreciating all of those who supported and visited Orlando in a huge new way, as they accomplished a Guinness World Record for gathering the most hand-written thank you cards in 24 hours.

These cards were written by people from local attractions, organizations, attendees to the luncheon and more, to be sent to all of the visitors who came to Orlando within the past year.

This exciting event was also used to announce the annual number of visitors for 2016: a record 68 million people in total came to visit our destination last year. This also ranked Orlando as the no. 1 vacation destination in the country.

“Orlando and Orange County continue to be the number one vacation destination in the nation,” said Orange County Mayor Teresa Jacobs. “But this wouldn’t be possible without the many millions of guests who choose to come here year after year for our world-renowned attractions and entertainment options. However, what makes their experience here better than another community is our culture of hospitality combined with out front-line hospitality workers and welcoming residents.”

To celebrate this huge accomplishment, Visit Orlando set out to thank all of those visitors in a big way, by writing over 900 thank you cards at the luncheon to celebrate National Travel and Tourism Week, to combine with the thousands that they had collected throughout Orlando and Orange County.

There were three separate criteria that had to be accomplished by each thank you note in order for it to qualify for the record: A greeting to open the note, a heartfelt and meaningful message, and a closing salutation followed with a signature.

Philip Robertson, an Adjudicator for Guinness World Records, was present to count each of the thank you notes that were collected from around the area, as well as those written during the luncheon. After counting, the total was 3,144 cards combined, setting the new record.

“Having had the pleasure of visiting Orlando, Fla. on multiple occasions in recent years for Guinness World Records title attempts, we can fully appreciate the positive sentiment behind this extraordinary collection of thank you cards. With great pleasure we declare Visit Orlando, Guinness World Record title holders and officially amazing,” said Robertson.

Not only that, but this act kicked off a brand new campaign called #OrlandosBIGThankYou, to thank the millions of people who come to visit Orlando and support the city and its attractions. This campaign will thank those guests through handwritten cards, destination websites, marketing communications, member programs and Visit Orlando’s social media platforms.

“Orlando’s visitation number represents the emotional connections we make with millions all over the world. The love they show us never ceases to inspire us, and led us to launch a year-long campaign around two important words: thank you,” said George Aguel, CEO and President of Visit Orlando.

Wishes fireworks come to an end at Magic Kingdom

Check out this Cheese Theme Park in...