Out of the Loop: Cedar Point’s record-breaking GateKeeper debuts 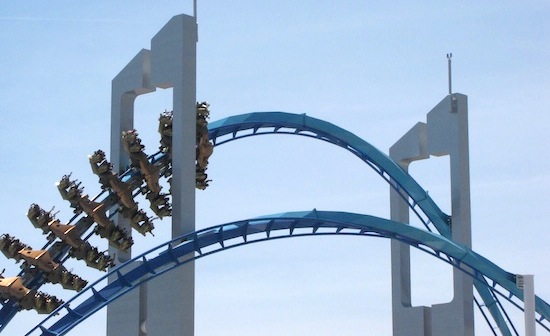 Sandusky, Ohio – “Orlando Attractions Magazine” debuted in 2007. That same year, Cedar Point’s 17th roller coaster debuted, the wild-as-the-wild-west Maverick. The Intamin linear synchronous motor launched coaster features a steeper than vertical initial decent and is the first coaster to integrate a “twisted horseshoe roll”. It was the first coaster debut we covered. Fast-forward to 2013 and we are (finally) talking about another incredible coaster debut by Cedar Point. GateKeeper is Cedar Point’s 16th roller coaster. Two coasters have been dismantled in the past year. This Bolliger & Mabillard (B&M) wing coaster is no less spectacular than any previous debut at the ‘Roller Coast’. 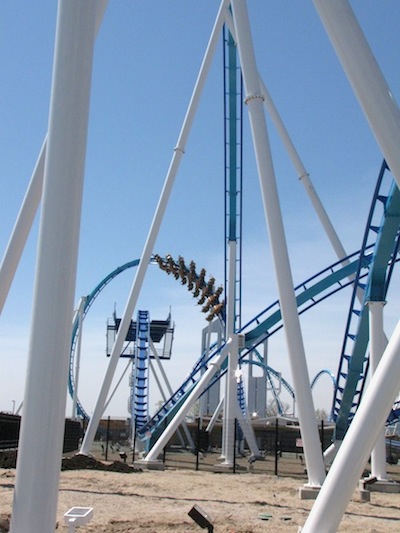 The GateKeeper is the fifth B&M wing coaster in the world and the third in the United States. The ride vehicle on a winged coaster is unique in that two seats are situated on either side of the track, like wings without track above or below the rider. Having not personally ridden any of the other wing coasters in the U.S. (Wild Eagle at Dollywood and X-Flight at Six Flags Great America), one would naturally go to the stat sheet for comparison. The GateKeeper is indeed a record-breaker. It is the longest (4164 feet), fastest (67 mph), has the longest drop (164 feet), and has more inversions than any other wing coaster (six). Moreover, each inversion is different than the last. It also features the highest inversion of any roller coaster in the world.

But, how does it ride? Well, it is different than any coaster I have been on. The wing seating is similar to that of SheiKra at Busch Gardens Tampa with no floor or track overhead, but SheiKra’s car sits on top of the track and is very wide across giving it a less nimble feel. The suspended cars of Islands of Adventure’s Dragon Challenge have as much maneuverability as GateKeeper, but with the track overhead, it doesn’t have that open, airy freedom of the winged coaster. GateKeeper has the buttery smoothness of DiamondBack at Kings Island, but mimics flight more than that giant humped hyper-coaster.

From the start, this coaster surprises riders. After ascending the 170-foot initial drop hill, the coaster performs a wing over 180 degree inverted drop (see video below). Toward the middle of the ride, the coaster enters a zero-G-roll right through the keyhole structures at the front gate of the park (keyhole, front gate – get it?) in a near-miss experience that is one of the marquee maneuvers of the whole coaster. After the turn-around, riders must endure a 360-degree in-line-roll to now narrowly miss the outside of the keyhole structures. After all of that and including an Immelmann (half loop with a twist), an air-time camelback, a giant flat spin, 360-degree spiral and more, one would think that riders would walk off the ride in a drunken sailor’s gait. For whatever reason – no. This ride seems to be less vertigo inducing than Dragon Challenge or Cedar Point’s Raptor for example.

John Hildenbrandt, vice president and general manager for Cedar Point, described the ride, “GateKeeper is unlike anything our guests have experienced before. It’s innovative thrills, like those our visitors will experience on GateKeeper, that keep them coming back year after year.”

My ride on GateKeeper:

Mold-A-Rama, Disney and old Florida will highlight collectibles show at Fantasy of Flight